MTV played 40 or so videos in the past year, then the station decided to let every clip it aired compete for a stupid silver astronaut. Better luck next year to the other nonexistent candidates! I've prepared a program detailing the presenters, performers and nominees for anyone who wants to follow along with Sunday's Video Music Awards -- or better yet, to read the descriptions in lieu of actually watching this useless event.

Eating awards only enhances T-Pain's cyborg voice.Performers: Lowlights include the Jonas Brothers, Katy Perry, the Ting Tings and Kid Rock, who's peddling a disgusting single ("All Summer Long") that crash-lands Lynyrd Skynyrd's "Sweet Home Alabama" on Warren Zevon's grave, then guns down any trace of dignity that crawls from the wreckage. Even the best musicians wouldn't stand a chance given MTV's house band: Tattooed nimrod Travis Barker on drums; former Crazy Town member DJ AM, who had a fat lump the size of former fiancée Nicole Richie removed during gastric bypass surgery and now plays "celebrity spinner" at retarded starlet parties; and electronically processed hype man T-Pain, a parasitic serial collaborator who uses his dreadlocks as tentacles to attach himself to hooks.

Sample Banter:
McLovin: You know, Michael, some people say we look alike.
Phelps: *Pummels McLovin in a spontaneous reprise of the Superbad punch scene, looks in panic at his lifeless body, escapes at a surprising speed by performing swimming strokes against the stage's floor.*

Lindsay Lohan: Michael, I hear swimmers have a lot of stamina, if you know what I mean. *winks*
Phelps: Well, I've got a breast stroke I'd like to -- hey, aren't you a dyke?
Lohan: *Stage whisper* It's called acting!

Drake Bell: McLovin! Break yo' self, foo! Gangstaaaas, what's up? Haha.
McLovin: Well, actually, Drake, my real name is Christopher, and I have other projects coming up, like I'm playing "Fishlegs" in the film...
Phelps: *Interrupts, strolls on stage* Did somebody say gold medal?!

When not presenting, Phelps will remain on display, swimming laps inside a giant aquarium.

Nominees: MTV's thin pool of aired videos resulted in several clips garnering multiple nominations, but I only wrote about each abomination once, which is why the listings become slimmer as the column continues. Also, I skipped a few videos because a) Garbage Day covered them before b) they were so dauntingly mediocre that their mundane details refused to adhere to my brain c) they really weren't that bad -- I'll leave it to you to decide if anything actually fit into this category.

What the hell kind of sissy has this type of fantasy?

Mariah Carey "Touch My Body": Carey seduces a hyperventilating, overacting "Compu Nerd" employee (Jack McBrayer), who naturally responds to her overtures by putting on a viking helmet and playing a Guitar Hero controller. (If Carey wins, McBrayer might storm the stage and recreate the regrettable Forgetting Sarah Marshall scene in which he and VMA host Russell Brand simulated sex positions using giant chess pieces.) Just when it seems this video can't get any gayer, Brett "Rush Hour 3" Ratner throws in a unicorn. The hackneyed fantasy culminates, as hackneyed fantasies often do, with an "it was all a dream" finale.

MTV's idiot input: "She's doing it big and totally funny, with 30 Rock's Jack McBrayer (the new Jack McFarland!), a pink princess party dress (which we really want), a for-real unicorn (which we really want)...." It goes on like this. I had to look up Jack McFarland, so he's probably not the brand name to which fledgling actors aspire. Also, McFarland is a fictional character, whereas McBrayer is an actual person, though I'm not sure the difference registers with someone who uses the phrase "for-real unicorn." Speaking of which, it's pathetic for an adult (woman? Judging by her/his/its Facebook page, author Tamar Anitai is a cat-shaped bread loaf) to pine for horned horses. Anitai, who posts on MTV's "Buzzworthy Blog," has become my new media nemesis.

Rihanna "Take A Bow": Rihanna talks big ("that was quite a show, very entertaining"), but nothing happens until she sets her cheating boyfriend's clothes on fire. He's not even wearing them at the time.

Jordin Sparks/Chris Brown "No Air": Sparks and Brown float weightlessly in deep space. Their voices fog up their helmets as they sing, so they thoughtlessly remove them for cleaning, at which point their heads implode. At least that's what should have happened. Instead, these two wander aimlessly bitching about "living in a world with no air," while the gusting winds that send autumn leaves spiraling behind them argue otherwise.

Flo Rida "Low": T-Pain sounds slightly less like a drunken, slurring robot than usual. Flo Rida raps unremarkably about the flexibility and fruit-like bottom of a "shortie," by which he means "random club skank."

Chris Brown "With You": Brown dances on sidewalks to what sounds like a generic dance remix of "Kiss Me," rides a bus, wears a magical color-changing flannel shirt and seeks shelter from a laser fight in the middle of a city street. Eventually, he adopts a ghostly white glow, but while he repeatedly says the word "boo," he is using it as an affectionate synonym for "sweetheart" and not attempting to frighten an assigned hauntee.

Usher "Love In This Club": Usher investigates a suspicious noise. He finds a temptress who whispers she's his "every desire." She disappears abruptly, leaving him to awkwardly make out with the wall. Usher flees the club, only to discover the building has burned down. Hopefully Young Jeezy, who contributes a terrible cameo, perished in the blaze. Usher must have used different music when filming his dance scenes, because this slow, wimpy tune couldn't motivate anyone to move, except for toward the nearest potential suicide implement. 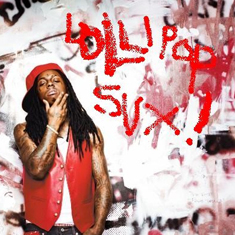 Graffiti artists can be so cruel.Lil Wayne "Lollipop":
XXL: What do you think about Lil Wayne? People think he's the hottest rapper.
DMX: He is nowhere near the hottest nothing right now. You can't be serious.

Kanye West "Homecoming": "Homecoming" provides as much boredom as you'd expect from a collaboration between Kanye West and Coldplay's Chris Martin, though it veers terribly awry when Martin starts yodeling.

Lupe Fiasco "Superstar": "Superstar" feels like a beggar's version of "Homecoming," with Lupe standing in for Kanye as the Chicago-based rapper and some fucking tool in sunglasses playing the part of Chris Martin.