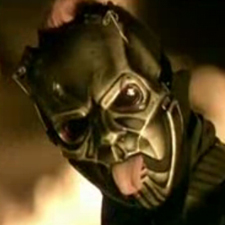 Slipknot "Psychosocial": Normally, I don't care much one way or the other about clowns. They're just weirdly dressed people who are irrelevant to my life, like golfers or popes. However, after watching "Psychosocial," I finally understand why some people think clowns are funny, because this clip was goddamn hilarious. Also, this is the only occasion on which I can relate to vapid clotheshorses who wonder what a nominee will wear to the ceremony. Slipknot's menagerie resembles a cosplay convention populated entirely with characters from the silliest horror game ever made. I laughed when they burned what I assumed to be a pentagram pattern in a cornfield, and I laughed even harder when a reader pointed out that it was actually a 9-point star, which he informs me is big with the "underground Satanist gimpy clown-cunt movement." Other occasions for snickering: Whenever things lapsed into slow-motion, and whenever they showed Ol' Dicknose, and every time the gimp-masked singer showed off his pretty chorus voice.

Fall Out Boy "Beat It": Michael Jackson should get a restraining order against emo bands, much like the restraining orders small children have against him. Fall Out Boy doesn't fail as pathetically as its genre peers -- or as spectacularly as Amy Winehouse, who owns the definitive shit version of this song -- but it had to outsource the Eddie Van Halen solo. It must be demasculating for a group to have to hire a guitarist in order to complete a cover, especially when the ringer they recruit is John fucking Mayer.

Linkin Park "Shadow of the Day": While I'd heard this song before, I'd never considered it was Linkin Park, as it features no embarrassing "rock-out" parts or mortifying rap attempts. But these days nu-metal musicians, having learned they're terrible at heavy music, have been trying to show their softer sides, with Fred Durst making a "girls rule!" kids movie and Linkin Park breaking out the power ballads. To make up for the wussiness, they've incongruously stuffed this video with riot squads, Molotov cocktails and exploding cars.

Foo Fighters "The Pretender": The Foo Fighters play in an abandoned airport hangar, which draws the attention of one of those omnipresent riot squads. The helmeted troops attempt to subdue the band during a musically vulnerable moment, only to be blown back when the Foos shift back to relative loudness. The giant monitor behind them detonates and expels red liquid, as if it were a plasma screen filled with actual human plasma. Someone beat them to the playing-through-a-blood-monsoon effect, but it's adorable how the Foo Fighters, the definition of nonthreatening, blandly palatable radio rock, experiment with anarchic imagery.

Paramore "crushcrushcrush": This video starts with a Hills Have Eyes-like premise: Unarmed innocents roam an isolated desert, while mutants spy on them with binoculars. Nothing much happens after this set-up, except for a few broken instruments. Regardless, it's better than Hills Have Eyes 2, though it reminds a YouTube commenter of that movie's fagtastic closing credits song, and YouTube commenters are never wrong. 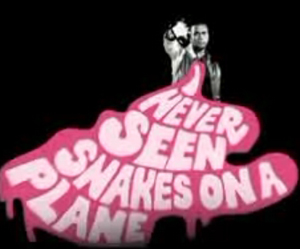 You're not missing anything.

Kanye West "Good Life": If there's anything less welcome than another fucking T-Pain cameo, it's a 2008 Snakes on a Plane reference, or seeing mundane lyrics rendered in cutesy graffiti. Kanye West is the anti-wishmaster.

Missy Elliott "Ching-A-Ling/Shake Your Pom Pom 3D": This video features the best dancing out of the whole field, but given that it's in the Special Effects category and nothing else unbelievable occurs, it must be bullshit.

Linkin Park "Bleed It Out": Now, this is the Linkin Park I know and hate, playing atrocious rap-rock while people stage-dive, crowd-surf and mosh in reverse, almost as if they realized "hey, this is a Linkin Park concert," and meticulously retracted their enthusiasm.

Miley Cyrus "7 Things": From watching these profoundly distraught 10-year-old girls weep into their stuffed animals, you'd think this song was about child abuse, molestation, leukemia or some other serious issue that afflicts children. Instead, they're supposed to be devastated by their middle-school breakups: No more chaperoned hand-holding at G-rated movies on a Saturday afternoon! Cyrus says "chaw" several times as this song begins, because as an influential hick she's obliged to persuade her young listeners to chew tobacco.

MTV's idiot input: We meet again, Tamar Anitai. "A Miley and Michael (Phelps) hook-up? Someone needs to make that happen. MP + MC 4ever?" I know MTV has a long history of helping prepubescent female singers turn into gussied-up prostitots, and I realize the temptation to proclaim Cyrus "the Michael Phelps of teen pop" because she won some Teen Choice awards was just too overwhelming. Still, do you really want to accept responsibility for a 15-year-old girl being impaled by that Heroic harpoon inside Phelps' Speedo?