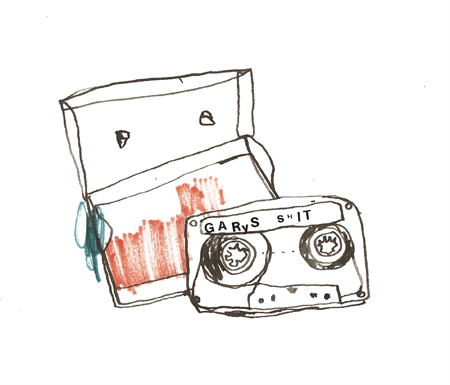 Randy looked at the tape and realized it was an original mix creation! The handwritten label said "Gary's Shit" in big letters and the inside of the cover was a list of strange and foreign names that looked like messages from a strange and foreign planet. NWA? Ice-T? Snoop Doggy Dogg? Little Randy took the tape home and listened to it again and again until the words and names of these strange artists became as familiar as Garth Brooks or any of his other tapes that his parents had bought him from Wal-Mart.

Well, in case you didn't guess already, that petulant little kid grew up to be none other than ME, Randy Black, the dude who's kickin' the truth to you right now. And rap music rescued me from a life of troublemaking and sugary sweets and helped me become a serious music fan that didn't do all of the bad things that I had previously done. I soon started buying all of the rap I could find, and - don't tell - I even wrote a couple raps of my own. Even though I'm a white guy, I think it's still okay because I really get into rap music with all of my heart, and also I have never ever used the 'n word' in any of them.

Even though I'm probably the biggest white rap fan you'd ever meet, sometimes things happen to shake my confidence in the power of rap music to save lives and be a positive influence. Just as rap music can make a little kid straighten up his act and become a better person, the wrong kind of rap can turn an impressionable person to crime, or even worse - murder.

Recently, I was out of town for a few days on a long awaited vacation. I spent a week in an indoor waterpark in Ohio with my significant other, and the two of us just had a great time riding all sorts of water slides and drinking fruity drinks and even having a little "adult fun time," if you know what I mean. After a few days, I was definitely feeling recharged and ready to jump back into the swing of things in my day-to-day life as a rap journalist and telephone sales representative. 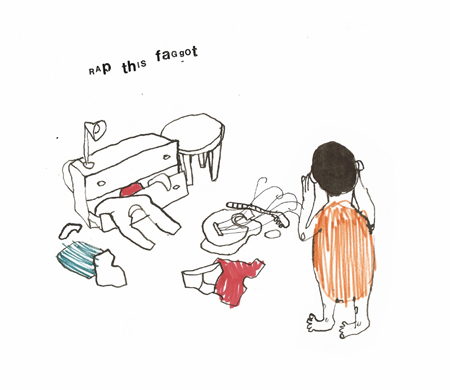 However, when we returned home from the trip, we found dark days looming on the horizon like fate sitting on the corner in a Cutlass Supreme with tinted windows, waiting to do a drive-by on our good fortune. We returned to my humble abode to find the front window shattered, leaving bits of broken glass littered across the lawn like so many empty 40 bottles! Inside, we found that my computer and TV had been stolen, my guitar was smashed in the corner, and somebody or their dog had defecated in the corner of the living room! My clothes were scattered all over my room, and some shirts were missing, and there was even graffiti on one of the walls that read "RAP THIS, FAGGOT!"

I was stunned by this development. I have spent most of my life identifying with and supporting the struggle of the streets due to my support of conscious rap music and the culture it stands for. I never once thought that the light-hearted tales of criminal behavior I loved to listen to would make an appearance in my life. I started to get really depressed, and I began to think about what it means to listen to a rap band whose lyrics glorify burglary, now that I knew what it felt like to be burgled myself.