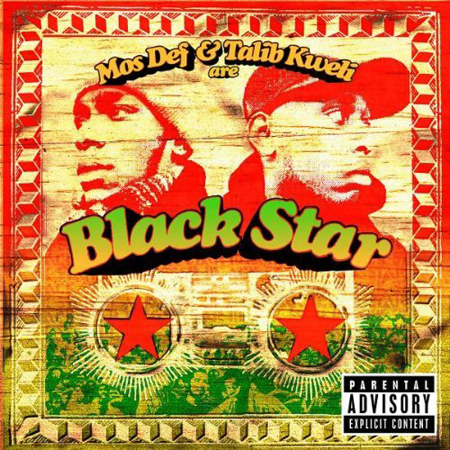 I was ready to throw away my remaining rap CDs and dedicate myself to a life of rock music, which never mentions breaking into people's houses as a "fun" thing to do, the way some rap does. Gathering together a stack of discs and a garbage bag, I noticed the album cover of the record Black Star by Mos Def and Talib Kweli peeking out from the corner of the shelf.

Mos and Talib's sage-like faces stared at me from the artwork and I could see the compassion and love in their faces. I knew right away that I was being dumb to think of all rap as encouraging violent crime and electronics theft. Mos and Talib are true intellectuals of the rap world, and their wise and grizzled countenances caused me to 'check myself before I wrecked myself.' Thinking of all the positive rhymes and good feelings that they had brought to my life, I immediately snapped out of my funk and began to reshelf my rap CDs, in alphabetical order.

Anyway, I should probably end this now - I could talk about rap music for hours - but I just wanted to let you guys know about the positive power of rap music. Sure, rap can be a force for evil in the wrong hands, but you can't let that overpower the potential it has for good in your life, even if it's just making you feel better about being broke or living in public housing or having your Xbox stolen while you're at a waterpark in Ohio.

Beats and Rhymes forever, ya'll! Stay positive and don't forget - turn up the bass and lay low on the treble.

P.S. If anybody in Mobile sees a guy wearing a black shirt that says "HIP HOP SAVED MY LIFE," it's probably the guy who broke into my house cuz that shirt is missing, and I ordered it from the Internet so it's pretty unique. Also he stole a Lil Wayne shirt and this old shirt from high school that has Tweety Bird dressed up like a gangsta.

Thanks to Ali "Dirty Deals N' Stiletto Heels" Horn for making me look good in those drawings! U-N-I-T-Y, sister!

This column combines two entries that originally appeared at my own little site Randy's Rap Report. Feel free to dig around there a bit and see if you find anything else you like. But I'll be right back here at Something Awful next month, with more of my takes on the hottest news, reviews, and attitudes in the world of rap music today!