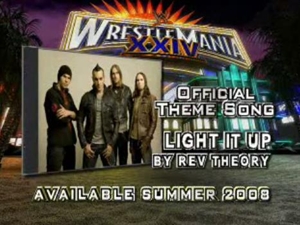 Rev Theory and WrestleMania: A match made in Hell. (Yeah!)

I'm grateful that I had to research those Rev Theory/WWE connections, because the relative inaccessibility of the information provides evidence that these unpalatable entities have segregated themselves from fans of real music/sports. You can't just flip channels and conjure some greasy, steroidal freak preening to Rev Theory's lovingly composed shit-rock serenade. You have to pay for this dubious privilege. Similarly, I hope Xbox Live's Video Store allows every fledgling Saliva to unload its latest soul-deadening creations without affecting people who access music through traditional means.

"Hell Yeah" serves as a checklist for future quarantine prospects. Henceforth, videos should be relegated to Xbox Live if:

1) They feature one or more WWE "personalities."
2) They depict a group performing live while surrounded by grounded airplanes, as if they're fucking Slaughter in "Fly to the Angels."
3) They contain a car chase that doubles as a trashy-couple mating ritual, with sexual subtext dragging behind the vehicles like leaden parachutes.
4) Some tangential character in a service-industry job (in this case, a jilted diner waiter) throws his apron/uniform to the ground in slapstick dismay.
5) A hick cop gets surprised and spills his coffee.
6) They end with a "to be continued" cliffhanger that leaves viewers hoping that sweet death arrives before the sequel.

It's impossible to fathom a sane person purchasing "Hell Yeah," or seizing the Xbox Live option to use graphics from Rev Theory's Light It Up album artwork (shocker: The cover contains a scantily clad woman) to decorate his or her personal affects. Perhaps Interscope's big-name acts refused to be identified with the doomed launch of a pay-per-video marketplace, and the label spun "low-rung act forcibly associated with dumb idea, subsequent stench of failure" into "up-and-coming band introduced in futuristic setting!"

Regardless, it's reassuring that Rev Theory isn't popular enough to launch a mass movement. There could be no more certain harbinger of a merciless apocalypse than the sound of 12 million Xbox Live members bellowing "Hell Yeah" in unison through their headset mics, punctuating each 'hell' and 'yeah' with pumping fists. Instead, a few isolated genetic defects will wrap their feeble minds around this moronic rallying cry, high-five the empty air, and collapse, exhausted, before they can do any real harm.