During the first year or so of writing this column, I experimented with a wide spectrum of terrible bands. I eventually learned, to my infinite relief, that Something Awful readers do not care about the types of groups that were the most painful to research; namely, the generically shitty pseudo-popular ones that weren't really worth the energy to insult. So, those bands don't exist to me anymore. It has been extremely liberating to completely ignore the recent release of 30 Seconds to Mars and The Bravery albums, just like every other able-minded music fan in the known universe.

This produced somewhat of a winter dilemma, given that only bullshit groups like those release new albums around Christmastime. But instead of spending the barren months cataloging the mundane failures of "alt-rock" charlatans, I've started putting members of SA's No Music Discussion forum in touch with artists they actually enjoy and respect. Technically, Transatlantic is not such a band, but it does contain members of groups that qualify! This "supergroup" contains Mike Portnoy from Dream Theater, who took an extended leave from this interview as soon as he read the phrase "gay porn"; Neal Morse from Spock's Beard, a band whose moniker remotely triggers the Big Bang Theory laugh track whenever spoken; and Pete Trewavas and Roine Stolt from Marillion and The Flower Kings, respectively; acts that, in typical fringe-genre fashion, are better than the previously mentioned bands yet infinitely less well known. 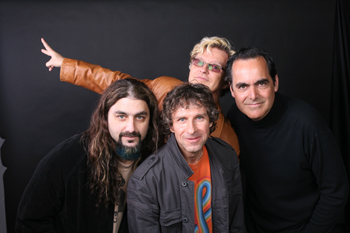 Q: You guys do prog rock. What the fuck?

Roine Stolt, guitarist: Gee, thanks! What a thrill. Well, it all comes very natural, as we're all into gay culture and spiffy animated movies. The combination is just so fulfilling! We aimed for explicit animated porn mayhem, but we settled for the "woodland elves" motif because it's so much more family-friendly and inspirational in terms of color, sound and neo-prog, in general. By the way, the Papa Smurf sound is simply included amongst the pre-fab synth sounds that we use for all our songs. Neal usually just calls out the appropriate button on his synth -- in this case, "#23: Triumphant." We also have "#14: Evangelic," "#49: Epic," and "#7: Genesis-clone." You get the picture.

SA: It seems many progressive rock songs alternate between really beautiful melodies and really fucked-up jagged bits. What makes you decide between the two, and do you ever sit there with a really nice pretty riff and just go "no, no, it's not weird enough yet" intentionally, or does it just flow that way because your brains are a bit broken?

RS: We alternate between the real and unreal world. When we get into the "unreal" mode, we just go with the flow and tag on to whatever weird riff is coming up. Most of the time, we just sit there waiting for the odd riff for hours and hours, hoping we might catch a new "Iron Man" or "Paranoid." But most of the time, it's surprisingly silent -- I mean, until we start playing, cranking it up to 11 and all that.

I admit we've had discussions about how to make the record pretty much unlistenable by throwing in bits of noise and playing old 4-bit recordings of Hitler, Gandhi, Buster Keaton and Salvador Dali backwards, or even upside down. But because they are not 24-bit 96kHz quality, we just build our riffs from neo-progressive noise, normally some old Pendragon tune or Steven Wilson's private tapes from when he was still neo.

As for beautiful melodies, we don't have it in us. So we make up Genesis wannabe synth pastiches, a few ELP-clone Hammond clusters and derivative Yes vocals about elves, gnomes and sun showers. Then, we just put the "Morse, Stolt, Trewavas & Portnoy" song credit tag on it. It's the fastest way to get international recognition and record sales!

PT: I think you're missing the point here. It's a challenge between the four of us to fuck up as much really good music written by the other guys as possible. We have a point system, and the winner at the end of the session gets to mix the whole thing. If you watch the making-of DVD, you can see all the scores written quite clearly on the white board.

SA: What kind of competition, musical or athletic, do you think would present Transatlantic with a distinctive advantage against other vaunted supergroups, such as Chickenfoot and Asia?

PT: Hair product gets my vote. We win hands down with not only the amount but also the range of potions, lotions, waxes and gels we use in the studio, and particularly live. Why, just keeping Mike's beard up to date takes a suitcase full on its own!

RS: Chickenfood, that's easy: From a musical perspective, we've got SO much more to offer in terms of Mellotrons, Moogs, theremins, gremlins, spam, etc. The keyboard setup between me and Neal is just ridiculous -- and I mean compared to Satriani's skinny pedalboard, etc. I don't think they even have a keyboard tech!? Our engineer told us we had 150 tracks in ProTools for The Whirlwind alone. I'd imagine Chickenfood might have, at most, 24 or 32... or 37.

Asia, on the other hand, has WAY more keyboards than us. Just look at the '80s VHS where Geoff Downes has a football field filled with antique synthesizers and organs; he had to take a minivan to get to the outer range of Hammonds. But we are much younger and more athletic, so I can see us beating them in a wrestling tournament any day. We would have to look out for Carl Palmer, though; he's annoyingly fit for a 58 year old. I think I read something about him being him into martial arts in the '70s. Oh well, we'll see -- we're younger, anyways. 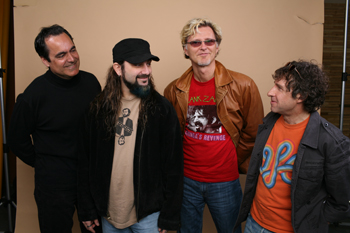 Pete Trewavas (far right), what superpower would you like to have? "That's easy, the ability to grow taller during solos."

SA: Pete, as someone who joined Marillion back in 1982, do you ever think, "man, if only I were a young man just getting started with Marillion today, what with all the hot babes that show up at prog shows thanks to the demographics-expanding magic of the Internet"?

PT: You're so right. I'm actually doing research into making myself younger. And thanks to the Internet, I can just lie about my age. I tried using old photos of myself, but actually, it works better if I use old photos of Joe Walsh.