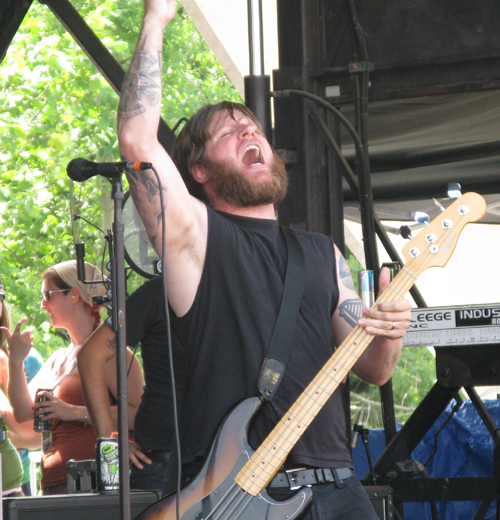 Like most hippies, this guy probably uses some ineffective crystal deodorant.Like Anti-Flag (mercifully not present), Against Me! dodges criticism by being aggressively sincere about its idealistic yet horrible music. It's like if some wimpy, beige-sweatered guy who's on the verge of tears plays a wretched Springsteen cover at a coffee shop. You could heckle him, but what's the point? Instead, people endure the onslaught, clap when it's over, some might even give him a hug. The danger of this policy is that it encourages future artistic overtures from well-intentioned talentless sorts. Suddenly, you've got national publications playing along to perpetuate the ruse, acting as if obvious songs like "White People for Peace" make radical satirical statements. Playing overblown folk-rock to promote noble causes is more laudable than playing eyeliner emo in order to fuck teenagers, I guess, but let's not mistake Against Me! for a bastion of punk purity. The members of Crass would fucking crucify themselves before playing something like Warped Tour. 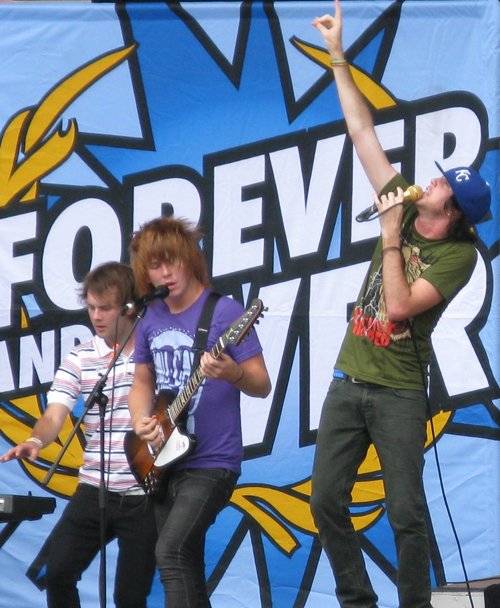 Against Me!'s cretinous Warped companions certainly make them look better by comparison. For example, as trite as their lyrics can be, Against Me! almost always uses real, often polysyllabic words, while their tourmates resort to "Whoa Oh" (Forever The Sickest Kids). FTSK promises profound gayness with its retarded moniker, which creates leery expectations, like when someone says "I think this milk is rotten, can you smell it?" or "fuck, the toilet's clogged, can you give it a look?" But even though I was braced for the worst, FTSK ambushed me with an unfathomable redefinition of dreadfulness, alchemizing booty-bass club beats, '80s prom balladry, bright-pink emoting and stilted rap cadence into a vile concoction that felled me with its noxious fumes. 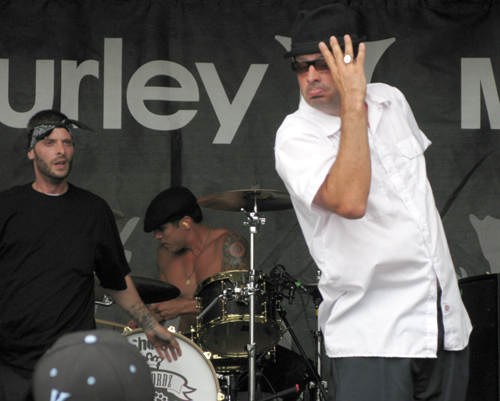 With FTSK representing the "young, suburban and fey" side of the spectrum, I sought an "old, urban and macho" transfusion, in hopes that a polar opposite might provide the antidote. The Lordz answered the call. Back in 1995, these dudes dressed up like Goodfellas, called themselves Lordz of Brooklyn and played rap/rock the way it used to be played (shouted rhymes over sampled classic-rock riffs). These days, they lean toward straightforward street punk, answering the unasked question "what if Rancid replaced its singers with two shitty white rappers?" (The Transplants, another Warped Tour alum, half-committed to this formula, using one Rancid vocalist and one shitty white rapper.) Proving that anyone with a minuscule simulacrum of fame rates a reality show, the Lordz have their own program called The Brooklyn Way. If any camera crews were on hand to record the group, they'd have damning evidence that the Lordz performed for about twenty indifferent spectators.