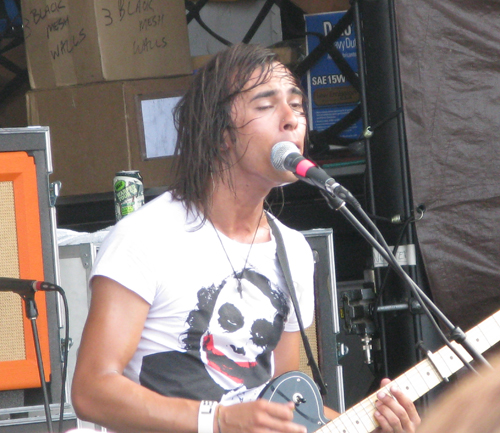 This guy: Better at looking like Sarah Silverman than sounding like Michael Jackson.Like the Lordz, Pierce The Veil underwent a name change (from Before Today) in the past few years. Unfortunately, this alteration did nothing to correct what really needed changing: Singer Vic Fuentes' abrasive whimpering. The group modeled jean shorts so tight that they probably performed castration by circulation constriction, but even as a eunuch, Fuentes couldn't come close to hitting the high notes during a risible version of "Beat It." Also, the guitarist totally tanked the solo. But if Pierce The Veil stuck to songs it could play competently, its whole set -- not just the novelty-cover slot -- would be completely blank. Besides, a completely butchered Michael Jackson tune still possessed much more musical merit than the group's faithfully rendered originals. On a sweltering day, it was the difference between a warm bottle of water and a chilled container of urine. 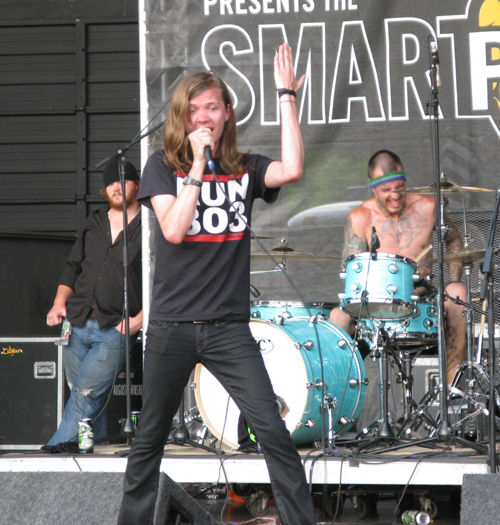 With a boy-band voice and Clay Aiken's face, this guy should really be a heartthrob by now.Pierce The Veil didn't win the prize for gayest cover, because The Higher contributed an unironic version of 'N Sync's "Bye, Bye, Bye." The Higher is an emo band with an R&B singer, a combination that's like reading that you're fired, then having the termination notice squirt acid in your face. Anyway, no one in the crowd responded angrily to the serenade. No heckling, no produce-launching, no erect middle fingers. In fact, several spectators sang along. At earlier Warped Tours, people might have rioted and stormed the stage. Both approaches are moronic: Disproportionate rage toward mainstream acts, such as the "Spear Britney" shirt that someone wore to Warped Tour 2008, is transparent overcompensation for closeted pop-loving tendencies. The Higher should be stoned with all possible projectiles, not because they paid homage to 'N Sync, but because the rest of their material is so insultingly bad. Singer Seth Trotter clearly wants to be Justin Timberlake -- he even named a non-cover "Rock Your Body" -- but he should satisfy his boy-band fetish at some Las Vegas karaoke bar rather than corrupting idiot kids. 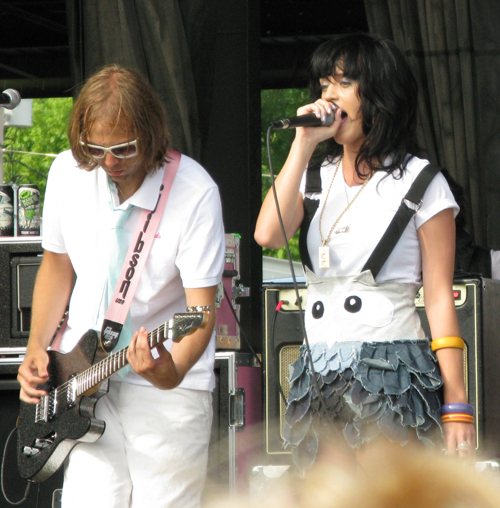 My Warped Tour experience concluded with old nemesis Katy Perry, who took the stage with an owl wrapped around her waist. Perry lived up to her Internet-scavenger persona, saying "WTF?" aloud and urging spectators curious about her bizarre "uterine tube" similes to "Wikipedia that shit." Should her fans search for Angelo Moore, who made a theremin-playing guest appearance during "Ur So Gay," they might learn that his group Fishbone played in a prime-time slot during Warped Tour 1996, and they might ask themselves "why the fuck is he settling for Katy Perry cameos?" Perry's set was plenty fruity even without inflatable strawberries and cherries she tossed into the crowd, but compared to her pansy Warped peers, this husky-voiced girl-kisser seems like a warrior king.

When Warped started, it banked on cranky punks hectoring kids half their age. No one expected the inaugural cast to receive tenure: Today's grade-schoolers might be skeptical of lectures from grandpa Bad Religion. But Warped needed to groom apprentice bands that would inherit the business of creating fast, angry, funny songs. Apparently, an entire generation of "punks" failed at this assignment, leaving Warped populated with effete snivelers who are either cynically pandering to the youth of today or communicating with them as equals because they're so severely emotionally stunted. Warped 2008 suggests the latter: Teens are having their dopey behavior, crippled vocabularies, atrocious fucking fashion and terrible musical tastes reinforced by Internet-buoyed man-children who never outgrew, or felt properly embarrassed by, their "experimental years."