They Came From the Kindle: "Centaurs"

We begin our series spotlighting interesting fiction on the Kindle with a subject that matters to us more than ever in these uncertain times of technology, terrorism and financial crisis. A subject that really defines us as we are today. Centaurs.

The centaur can represent the savage and the tamed, the war of the wild versus domesticity, and the noble spirit of the horse fused with the existential yearnings of men. It's no wonder that this generation's great writers have been eager to incorporate them into such interesting stories. 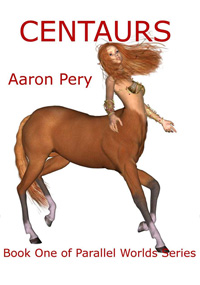 Centaurs poses a simple, but profound, question: what if there is life after death and it is centaurs?

This 290 page fantasy/sci-fi epic follows the exploits of Martin and Nicole, an elderly couple who are killed by lightning, only to have their souls meander to another dimension where they become gender-swapped centaurs. They uncover a plot to enslave the centaurs and so they go on a killing rampage to exterminate another race called "Gogians." This plot unfolds in a world of centaurs having chapter-long conversations, in a book in which the author sometimes does not use quotation marks and rarely describes who is speaking. In some cases four and five people will be talking for pages and you will have to guess who is saying what.

It's also a jingoistic right-wing fantasy piece in which the perfect world is one where centaurs from the USA bang and poop in public and smoke cigars wherever they want. Yes, really.

The horror of genocide:

Once Martin and Nicole decide to exterminate the Gogians, including the children, they poison all of their food and then set up a circle of centaurs with guns around the Gogian city. After over a hundred pages of talking, the genocide is described in one sentence.

It took nearly three hours of constant shooting by everyone before Marty gestured to Sue, who was positioned on a hill overlooking the youngsters' compound, to join her on the roof.

"It looks like it's all over so I'd like you to take over the site while I go inspect the hospital for any living Gogians."

She burst into laughter when the result of Nick's startled reaction to hearing her voice in his head was to let go of his bowels, which he looked at with disgust.

Did I mention one of the characters invents a perpetual motion machine and brings it back to earth to taunt liberals over global warming? No?

When the CBS reporter, totally shocked by Adam's words, could not retort to him, the ABC representative jumped in. "I won't try to dispute the validity of your statements Mr. March, but don't you agree that releasing your invention globally will literally save the planet from all the toxic emissions that are causing the current global worming [sic] disaster that's threatening us all?"

Adam burst into laughter, which startled everyone. "Your question, Ma'am has just proved your ignorance about our planet's warming cycle, which has been going on for thousands of years, way before we had started burning fossil fuels. But regardless of that, shouldn't you first demand that New Zealand stop raising sheep, which release a lot more carbon monoxide into the atmosphere via flatulence than the entire US vehicle and industrial emissions? Yet you blame your own country of ruining the world, which to me is traitorous."

Because of our physique, which is in essence quite horse-like, we do our personal business just like them--whenever and wherever we are at the time without giving it a thought as long as we don't do it on the floor of a public building.