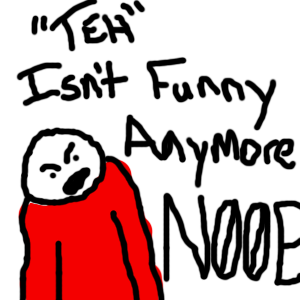 Losing your virginity is like commencing a serious nuclear attack. If you lead up to it, you'll get nothing but resistance. You have to undermine, my friend. Learn what your strengths may be in the rhetoric of the group you're frequenting, and then apply that in a non-confrontational bragging manner.

The last time I physically opened and read a Harry Potter book was in 6th grade, when the first books were becoming a big deal. I got about 30 pages in, didn't like it, and never touched them again.
Unfortunately the rest of the world doesn't think the same way, and with the last book to be released this Saturday my Borders Bookstore promises to be filled with rabid 10 year-olds and creepy middle age people waiting in an enormous throng to secure their copy of the book.
Our store is having a Harry Potter "party" and the staff have been "gently encouraged" to dress as one of the characters from the books. Now I don't know much about Harry Potter, but I thought I'd go as Snape since he's the only character I could see myself as that I recognize.
So tell me a cheap way to get a Snape costume. What does he wear?

You are gonna laugh at me.
I'm basing it on Dungeons and Dragons stats. A "Comeliness" score for looks. So a 0-1 would be a -5 to all interaction checks having to do with looks. 2-3 is -4 to all checks, 4-5 is -3, 6-7 is -2, 8-9 is -1. Past that, a 10 to 11 is +0(neutral) and above that you would get bonuses to all checks having to do with your looks, at the rate of +1 per 2 points. 20 would be your max, granting a +5 bonus.
People like that dude from mask would be 0 to 1, obviously. The OP, I think I said she was 5 or 6, so -2 or -3 to all social interactions based on her looks. And yeah, the black queen I gave an 11 or 12, because she is kinda cute, to the point where she would probably get bonuses in interaction with people because of it. My own girlfriend I would rate about a 12 as well. Your 13-14's would be chicks like that egg throwing gal, your 16-17's would be most attractive hollywood gals like Kiera Knightley or Natalie Portman, 18 would be your top tier models and actresses, like Jessica Alba or Scarlett Johanssen, and your 20's would be the single most attractive people on the Earth(in my often changing opinion, today it is Jessica Biel).
Well, I've just set myself up for ridicule, I hope you appreciate it.
Also, hope OP is reading the thread still. Lots of good advice for her. With some of the touch ups she immediately jumps from very unattractive to passable.

Music mainly, reviewing track ideas on my mp3 player, harmonising melodies in my notepad, writing beats, coming up with pissy little lyrical things, that sort of stuff.
Apart from that I think a lot about where I'll be in a few years, jobwise (or studywise if I can get some cash behind me), thinking about all the different kinds of jobs available to me and how to get them. As a rough estimate I'd say I've applied for around 300-400 different jobs since I was last employed, mainly in my area of knowledge, but that's obviously not good enough so I've been looking in other directions too.
Then there's a certain crippling phobia that I'm trying to get over - once I can get past that to a certain extent I'll be able to get some medical tests done that I've been strongly advised to take and that will hopefully then lead on to me being more capable of taking control of my life. It sounds a bit vague, I left out several steps, I'm still not comfortable talking about it, but I'm working on it. It's heavily affected my diet, leisure activities, job options, the whole shebang, and it's been getting progressively worse all this year up until the last few weeks (I've started trying various techniques to get through the fear and it's helping a bit). So yeah, that's been heavily on my mind lately. In fact it's just one of the factors preventing me from leading a normal life so here's hoping that I get past it soon and things will take a turn for the better.
Also, women, but I really need to get past the unemployment and that phobia before I bother with women again because realistically I'm a complete mental wreck at the moment and I don't want to weigh other people down with my shit. Not trying to get down on myself but I've gone SEVERELY downhill over the last 2 years (well, 10 years really but mostly during the last 2) and I'd rather get my flaws treated first so people can judge me on my merits. I mean, I wouldn't even date me right now but I wouldn't say I've "given up" on myself, I just need some work done first.
Finally, and this is kind of "meta" I think, but I also think about what kind of stuff I'll be thinking about further on down the line.