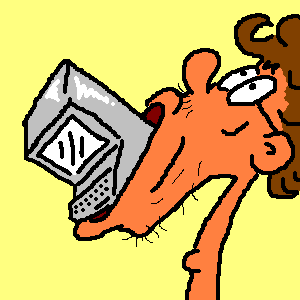 It's not a reference to anything from pop culture. The whole joke is about how the prince regent of England was a complete idiot fop at the time of the French revolution. If there had been television back then, his show would have certainly been on something like E! discussing trivial things like hair, and beauty rather than world news.
Of course, you can't really get the joke if 1) you don't know who the character is, (it's Hugh Laurie playing the Prince Regent from Black Adder the III), and 2)You don't know your time periods and realize what is going on at that time period (by all appearances, I would say the French Revolution is just about to happen. He's talking about how fabulous the king of France looks when the real news of the day should be how thousands of French poor are starving while royalty spends and spends.
I think the joke, although it's really awesome, would have been easier to recognize if he had used a picture of Marie Antoinette instead, as she's a much more recognizable figure from that era.

She is in college with me, and I've seen her at least 50 times already (like passing each other in class/hallway/street). We recently talked, and it was all smiles and pleasant conversation about work. Someone else was there, so it wasn't a one on one. We only talked because we had to for class. She doesn't have many friends, and it looks like she's a loner (even more so than I am).
The thing is, I find her attractive. And I don't think many others do.
So, I'm gonna go for it.
At least I'll have some backup lines in case things fall a little flat. This feels like a boxing match. Tomorrow I'm gonna be shadowboxing in front of the mirror in a sweat suit.

I have read the books once each, and seen the movies more than twice each. I have some questions, and I hope someone more knowledgeable can answer them. Also, if someone else has other questions, post them, and I will try my best to answer them (and if I cannot, I bet someone else can).
1. After Gandalf was imprisoned by Saruman, Gandalf escaped. Did he get his original staff back, or make a new one? If he got his original staff back, how? If it was a new one, it looked identical to the first.
2. In the Mines of Moria, when the group was attacked by the cave troll and some goblins, why didn't Gandalf use some magic? He was only swinging a sword, he could have certainly done some more damage with magic. Same question for the big fight at the city of Gondor, why no magic?
3. At the Bridge of Kazadoom, why did Gandalf deny help up? It seems to me he fell down on his own free will, and could have been pulled up with a little help.

Yeah, I have a weird trait where I start to subconsiously emulate my favorite fictional characters. In the past this was George Costanza, so I was neurotic and sarcastic all the time. A while ago it was Monk so I was developing mild OCD. Right now it's Charlie from Always Sunny in Philadelphia so I'm swearing and getting angry over little things all the time. I try to reign it in but really have no control over it.
But really, that makes me so fucking angry. It's the same bullshit they(not Team17, a collective they) did with Metal Slug and Marvel: Ultimate Alliance. Ruined the games with stupid fucking motion controls. Motion controls are fine when they are called for, not when it would make a whole lot more fucking sense to use orthodox controls. You need three fucking buttons for metal Slug, which the wii controller provided in spaces, but could we press fucking B on the back to throw a grenade? No, fuck you.
The crux of Worms is pointing a mouse at your target, aiming with up/down keys, and holding fire to charge your shot's power. Can we do that? No, fuck you, we're on the Wii, we're gonna put in some motion controls for no reason because that's what players want. They don't want functional games. They want to shake the fucking controller. Fuck you. Jesus Christ it would be so easy to have a good control scheme for this. So god damn easy. And they're fucking it up.