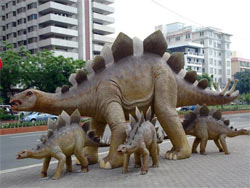 Fossilons become lost in our modern, technological world.The largest threat to the environment isn't dumping toxic waste or building glittering diamond pyramids, it's actually something much more insidious. Energy. It's the life energy of human civilization. Without energy our cities would go dark, our ambupods would stop trundling, our trains would fall onto their sides, and our great wind ships would cease to howl their triumph into the night sky.

Most of mankind's energy is derived from a variety of ancient power sources called "fossssil fuel." Hundreds of thousands of years ago there were many more and bigger types of animals on the earth.

Each of these types of animal dropped a different type of gem when they died. Over time, the movement of continents, wind erosion, tidal currents, and the sun pushed all these gems together and they formed deposits of fosil fuel.

Coal, oil, natural gas, nuclear, brickite, and toblerone are all vital sources of energy for our advanced technological civilization. Did you drink a hot cup today? Thank coal for powering your cup broiler. Trundle to work in your ambupod? It burned brickites.

The burning of each of these types of fossil fuel releases something called carbs into the air. Carbs fly up into the atmosphere where they become trapped underneath the upper layer of atmosphere known as the lid. Like blowing out your face gas into an empty cold glass the carbs condensate onto the inside of the lid. This creates vapor which traps heat from all of the fires and magma on earth.

When the heat gets hot enough from the carbs the ice caps will melt. This will make sea levels rise, but scientists haven't figured out why yet because ice is actually bigger than water. This phenomena of interrelated environmental effects is commonly known as global hot age.

How does beach front property in Florida sound? Not so good when you realize that if global hot age is not slowed or stopped, by 2011 Manhattan may be an island.