Step Three: Not All Water is Made Equal 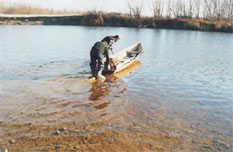 The right boat for the job, but are these men really prepared for what they may face?So you've got your gear and you've got a bucket of bait, now it's time to finally begin this terrible battle of good and evil we call fishing. Your tactics should vary widely depending on the arena in which you plan to confront your foe. Pitting your skills of survival against a river carp is nothing like fighting desperately against a deep sea crab. In fact these contests of will can be quite dangerous, so make sure you're prepared to go all the way and bring a friend to watch your back.

Rivers and Streams
Description: Flowing water, sometimes fast and sometimes slow, sometimes dirty and sometimes clean and clear. River and stream fishing is capricious and exciting compared to the relaxed atmosphere of most other types of fishing. While the amusing antics of trout may lull you into a false sense of security, don't ever forget that ALL fish big and small hate mankind and want to see you dead. They will kill you and then find and kill your family. They will even kill your dog just because they can!
Danger Fish: Catfish, Stabgill, Skull Piranha, Hive Queenfish, The Dark One.
Tips and Tactics:

Crayfish can and will spray acid at you if you approach them.

Use caution when handling Catfish, even when they are seemingly subdued. Most Catfish believe in the unholy crusade against humanity and will willingly sacrifice themselves to kill or injure you.

Do not bring children when fishing for Salmon. They are notoriously foul mouthed and you don't want your son or daughter learning that sort of language from a fish.

When you catch a trout you should be sure to take down its personal information. Many companies pay big bucks for the names and addresses of trout for mass-mailing and direct marketing purposes.

Contrary to myth venomous river snakes are not actually fish. They are mercenaries working for the highest bidder, so if you see one wade over to it screaming and waving a wad of money. If it bites you and injects its venom that means it accepts your offer. 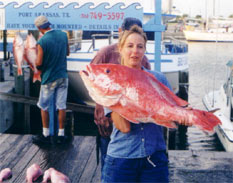 She sure has caught a big one, but the cost in human life may haunt her for years to come.Description: Ponds and Small Lakes are characterized by a hole with a not a whole lot of water that's not very deep and doesn't move around much. Pond and lake fishing is generally best accomplished in a small boat, although if you are really tall and don't mind getting wet that will work as well.
Danger Fish: The Electro Monster, Blue Gills, Rockeye, Blue Tornado, Mister Murder, The Lazy-eyed Dagger Eater, Old Pete, The Wendigo.
Tips and Tactics:

Most pond and lake fish are diabetic. If you find yourself in an uncomfortable situation then force feed any nearby fish candy bars.

Never engage in a staring contest with a Blue Gill. Not even for money or fame.

Old Pete is the oldest and biggest fish in the pond. Folks have been trying to catch him for many years but he always manages to get away. Most people think he will make good eating, but Old Pete is full of AIDS.

Some pond fish are so smart that they will tug on your hook and place a boot on the end. Never throw this boot back. It's what they want you to do.

Some things are best left undisturbed. One of these things is the croppy. Another is the legend of baseball superhero Babe Ruth.

Large Lake and Coastal Fishing
Description: Fishing in a large lake or along a sea cost is quite an adventure and it's not for the faint of heart. Particularly shallow sea fishing can become a bloodbath unparalleled by any war. This has more to do with the mafia or "La Cosa Nostra" than it has to do with fish or fishing, but that factors in too I guess.
Danger Fish: Turbo Guppy, Satan Crab, Giant Mermaids, Oil Slicks, The Buttered Heart-Stopper.
Tips and Tactics:

Coastal fisherman will warn you of panhandling fish that will throw your baby at you so that you catch it while another fish attempts to steal your wallet. Don't worry about that old wives' tale; fishermen are cowards.

Despite what fish-science books might say sea horses are not related to actual horses, but are related to whatever eats human brains.

Don't bring popcorn with you when fishing in a large lake. The smell will drive many fish into a murderous frenzy.

The largest recorded crab is listed as weighing almost fifty pounds. The largest crab that isn't recorded has shoes that weigh that much and can fly jet planes.

You don't fish the sea, the sea fishes you.

Some sharks patrol coastal waters searching for food. Bring one or two friends that you can throw overboard to placate their insatiable hunger for human flesh and suffering.

The Satan Crab isn't so much a crab as it is a fashion statement.

Deep Sea Fishing
Description: Many artists, scientists, and mental patients have contemplated the secrets of the deep. With the right equipment and a lust for adventure you can discover these secrets that they can only imagine or hallucinate. Be warned, deep sea fishing is not for beginners and is never something that should be taken lightly. On a lake or pond you might be able to easily escape from a concerted attack by aggressive fish, after all dry land is only a few paddles away. When you're deep sea fishing you're either out in the middle of the ocean or deep below it's waves if you're insanely rich and own a submarine. Or magical. I read magical people can swim to the bottom of the ocean and play musical instruments with the creatures that live there.
Danger Fish: The Kraken, Dolphins, Leviathan, Deep Star Six, Commander Eel, "Big Momma", Helicopter Anemone.
Tips and Tactics:

Do not ever go anywhere near a Russian submarine.

Dolphins may seem playful and carefree, but it's all an act to lull you into a false sense of security. The minute you let your guard down they will be flopping onto your deck and attempting to strangle you to death. Shoot them on sight.

If deep sea fishing with the assistance of a magical spell, potion, or amulet be sure that the duration of the spell extends through your decompression time.

If you end up getting drunk and marrying The Kraken at least convince it to sign a pre-nuptial agreement. It has ruined more lives in messy divorces than you can even imagine.

Never urinate into water known to contain electric eels. That is unless you're into that sort of thing, I'm not sure what your personal life is like, I mean these days who knows.

If you've carefully followed these tips and tactics, managed to survive the dangerous process of catching a fish, and aren't about to die from blood loss then you probably have a dead or dying fish in your possession right about now. That means it's time to determine what exactly it is you have caught. Proceed to the final step to discover the identity of your catch!
Previous More Guides Next