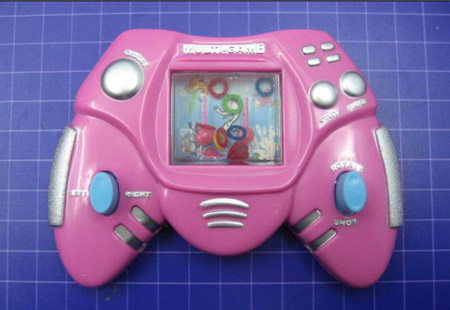 After this and "Computer" I'm not entirely convinced that China knows what the word "computer" means. It doesn't mean robot stickers and it definitely doesn't mean an Xbox controller and some plastic rings floating around in a tiny aquarium.

On the plus side, this will look great wrapped and deposited under the Christmas tree. Nothing crushes a child's dreams quite like opening what they think is a sign they're getting a new gaming console, only to find a baffling game of miniature aquatic ring toss. 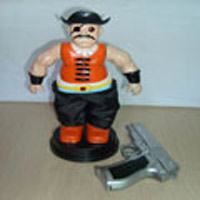 What they say: "Sound-control laser man, if you shoot the man and quiver, he will make sound and doff trousers hesely, funny and wonderful."

I wish there was a better image of this toy, because I am convinced it is either the absolute best or the
absolute worst thing China has ever created. A realistic automatic pistol and a fat pirate statue with puffy pants? The possibilities suggested by that combination are staggering.

The description of the product is even more enticing, yet mysterious. Why do I have to quiver when I shoot him? Why do I have a silver Colt. 45 to shoot a pirate? What the FUCK does it mean when it threatens that he will "doff trousers hesely?"

I implore our readers: find and buy this product. I will pay almost anything for Sound-control laser man just to learn his secrets. I must know if he is hate or love incarnate.

Until I know for sure, this madness is the number one Most Awful Toy from China.