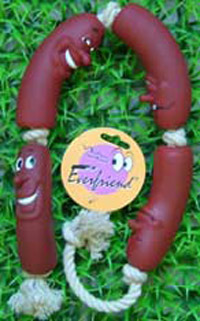 What they say: "Smile sausage with rope, keep your lovely pets happy time."

Okay, so it's a pet toy and not a kid's toy, which grants the manufacturer a little more leeway to produce something as shoddy and useless as the Smile Sausage Toy. I don't care! Just because it's going in my dog's mouth instead of around my unattended toddler's neck doesn't mean I am obligated to condone this sort of garbage.

When you injection mold plastic like these stupid sausages you have to produce a prototype that will be used to create the inverted molds. Knowing that makes it easy to imagine a lone Chinese artist in his workshop late at night carving out clay prototypes to desperately meet the deadline set by his screaming mobster-like boss. His instructions are, "Four sausages by morning, and they'd better look happy!"

Superficially, they do, but if you can't see the anguish carved into those grinning sausages then you're just not looking with the right eyes. Those haunted smiles seem to say, "I studied sculpture for six years in Beijing and I was paid 19 cents an hour to carve faces onto meat for your lazy American dog."

What they say: "Flashing sword with eight tones and three different light."

I'm disappointed to see that flashing and chirping sword technology has advanced at a snail's pace. I remember a friend of mine having a toy almost exactly like this back in the late 1980s. It had one flashing light and maybe three tones. This new model doesn't really reflect the roughly two decades we have had to improve our flashing sword and tone technology.

On the other hand, China has to be giddy that they've stolen the lucrative flashing tone sword contract from their rivals in Taiwan. Let's hope Smart Toys has the foresight to reinvest their profits into R&D for next-generation flashing tone swords.

I want to see a version with five lights and 16 tones before the world ends in 2012.