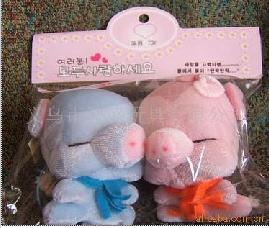 What they say: "As long as the kyte of the boy and girl sweethear pigs are stuck together, the girl(boy) pig would make the sound 'bobo' as if they were kissing, and then the girl(boy) pig would say: 'I LOVE YOU!' Their face would both turn red during the time they are saying these words. It's so funny! What's more, they will make these interesting action only when a girl pig meet a boy pig, and there will no response when two boy pigs or two girl pigs meet together."

These fuzzy pigs are a great teaching tool to warn your kids about the evils of homosexuality. I can almost see the educational drama playing out before a gawping toddler as his earnest, but evil, father demonstrates why gay is wrong.

Fifteen years later the kid's father will be sitting in his recliner and reading the paper when he spots a terrible headline.

It won't take him long to recognize the calling card mentioned in the article: "bobo" scrawled on the wall in the victim's blood. From there it's only a matter of months until his son is caught and convicted. A few years after that the kid will be a song on a Nick Cave concept album and nobody wants that for their kid. 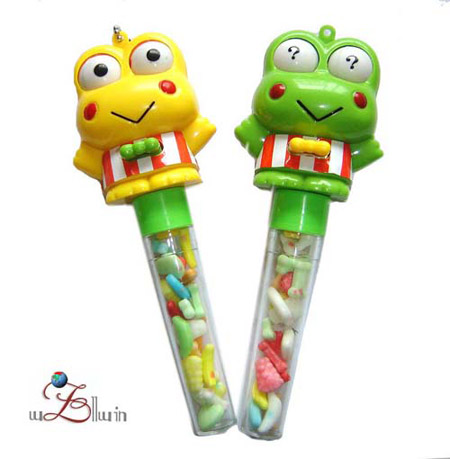 What they say: "The frog can be changed in different eyes. Children can eat candies when they enjoy toy."

This toy sounds like a pretty straightforward and crappy Pez rip-off with customizable eyes, but I sensed something special about the product and the company when I read Wellwin's corporate bio.

"Standing in the competition of today's business world, we advocate WIN. Our aim is 'to win, to wellwin, to wellwin the world' with our best service on new designs, fine workmanship, high quality and favorable price."

I would have placed this hunk of junk higher on the list, but I am a personal advocate of win and I can't help but empathize with the manufacturer. Empathy aside, this toy is wellshit.