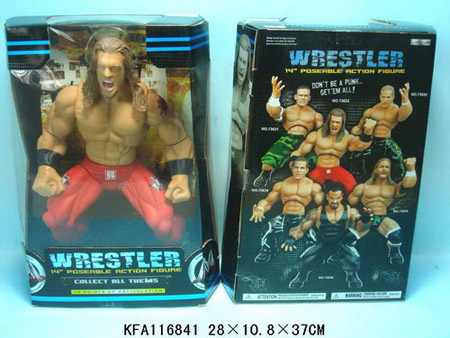 If you love WWE action figures, but you're sick and tired of having the wrestlers identified by name on the package, then welcome to the wonderful world of Chinese knockoffs. The third world produces knockoffs of pretty much every popular toy sold in the United States, but some of these fakes are better than others. Buy some cheap flea market figures from Mexico or Turkey and you're going to end up with something really bizarre. Something like Spiderman dressed as a woman or a talking Pikachu labeled as "Asia Electric Cat" that plays Christmas music when you squeeze its face.

The Chinese, on the other hand, are the ones producing the actual toys for American companies. They have access to all of the same material used when making the real things, which allows them to produce perfect duplicates like 14" Wrestler here. The formula is a no-brainer for the Chinese manufacturers. Wait until your contract is up with the Americans, lower the quality control to the point where your laborers are painting huge fried-egg eyes on the chests of the wrestlers, and then reap the profits as you flood the discount store market with unlicensed copies.

You make the money and some American kid gets the joy of a big figurine that only contains trace amounts of arsenic. As an added bonus, Mcfarlane Toys learns a valuable lesson about ripping that Edwardian Era Bathysphere Spawn play set contract from your hands and giving it to a rival to save a fraction of a penny per unit. 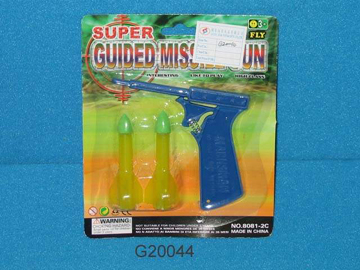 What they say: "Funny shooting toys, it can enrich children's daily life. It is welcome in the party game. It is hurtless when it is shot to others."

I will accept the manufacturer's claim that this product is "hurtless when it is shot to others," but I find the packaging fairly offensive. Take a long look at what you're actually getting for your $1.99 or however much this piece of junk costs. Now try to reconcile that with the name of the product on the package.

Claiming the plastic darts are "guided missiles" is bad enough, but slapping on the word "super" is just insulting. Terms like "super," "mega," and "ultra" get thrown around a lot on crappy toys, yet surprisingly these terms don't show up on higher quality toys. You can bet the level of hyperbole used to describe a toy on the packaging is inversely proportional to the quality and actual awesomeness of the toy itself.