Background: If the 16th century was the renaissance of shitty popes, the 10th century was the true dark age of the papacy. Popes during this time period were basically Genghis Kahn with a prettier hat. Pope John XII assumed the throne of Saint Peter at the seemingly tender age of 18, but back in the 10th century people lived to be about 25, so that was no excuse for the horrible reign that was to follow. 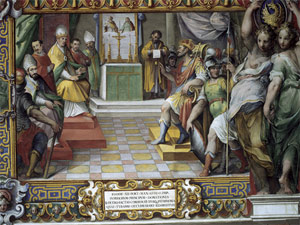 A list of crimes John XIII was accused of was included in the Patrologia Latina, which I assume is some ancient text of absolute bastard popes. These crimes are too numerous to mention here, but a few highlights include:

Pope John XII was no stranger to political intrigue. He granted Otto I of Germany the title of emperor in order to protect himself from his political enemies, but Otto I began to take more power than John XII was comfortable with. He conspired against his supposed ally, but Otto I returned to Rome and deposed John XII from the papacy and installed a puppet pope.

John XII fled into exile, but gathered an army of allies and mercenaries. He returned to Rome, ran off the puppet pope, and took back his title. Otto I mustered an army to finish off John XII once and for all, but he was too late. By the time Otto I arrived in Rome Pope John XII was dead. It is rumored that he was killed by a jealous husband when the man caught John XII in bed with his wife. By the way, his son became Pope John XIII and died the exact same way.

Pope John XII was a son of a bitch. There is no getting around it. If he is not the most awful pope of all time, he is certainly in contention as the most evil.

Background: The son of an influential family, Benedict IX is said by some sources to be the youngest pope to ever take over the Catholic Church. While official records state he was 18 like John XII, contemporary accounts suggest he might have been as young as 11 or 12. You might think he was unprepared at that age to be the pope, but looking back at the last three popes I would say he fit right in. 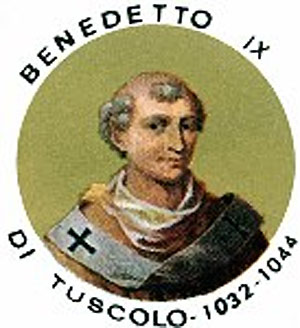 The face of an asshole.Why He is Awful: If you're looking for a pope with a Bartlett's full of nasty quotes from critics, Pope Benedict IX is your man.

St. Peter Damian accused him of "feasting on immortality" and described him as "a demon from hell in the disguise of a priest." Bishop Benno accused him of "many vile adulteries and murders" and Pope Victor III thought he was "so vile, so foul, so execrable" that he shuddered to think of Benedict IX's time as pope.

So what did he do that was so bad? Like John XII he had sex with and raped men, women, boys, and girls. Unlike John XII, good old Benedict IX extended the papal blessing to animals. He was also a back-stabber (literally) and tended to torture/drown/burn/flay-to-death first and then ask questions later.

Benedict IX's reign was troubled and, well, complicated. See if you can follow:

Benedict IX was deposed, regained the throne with the help of Conrad I, was forced out again, returned with an army to take it back again, sold the papacy to his godfather for a fortune, regretted selling the papacy and came back with another army, found the last guy he deposed and his godfather were both claiming to be pope, went to popel's court and failed to show up, the papacy was given to a fourth person, returned with another army and sacked the papal palace, was quickly forced out again by yet another pope, refused to stand trial and was excommunicated, and he finally retired in obscurity.