Background: Sometimes referred to as Stephen VI because of confusion over the legitimacy of some of the other Steves, Stephen VII took over as pope during a very turbulent period for the church. Popes were rarely lasting more than a year or two on the throne and intrigues among the powerful ruling families of Rome were at their height. Stephen VII took over for Boniface VI after only 16 days of that ill-fated pope's reign. Some say gout took poor unloved Boniface VI, others claim he was killed to make way for Stephen VII. Whatever the cause of Boniface VI's fate, Stephen VII was in for a bumpy ride as pope. 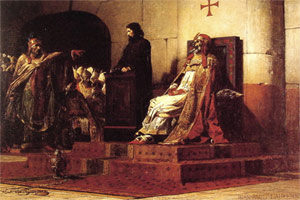 J'accuse!Why He is Awful: Stephen VII might not be as traditionally evil or disgusting as the other popes on the list, but he is responsible for one of the most bizarre and notorious incidents in papal history.

Before Boniface VI's brief stint as pope, there was the politically controversial Pope Formosus. Formosus did not get along with Pope John VIII and during that pope's reign Formosus acted as a sort of rogue cardinal. He was excommunicated for pissing off John VIII, but following John VIII's death he was reinstated. Two more popes followed and then Formosus became pope and immediately became embroiled in battles, both figurative and literal, between dueling political factions within the church. After five years of contentious rule, Pope Formosus died and was interred in Rome.

Fast forward a couple weeks to Stephen VII. He and his backers really had it in for Formosus and Stephen VII decided that John VIII's original ruling should stand. Rather than just re-excommunicate the deceased pope, Stephen VII undertook what would become known as the Cadaver Synod. A synod is basically an ecclesiastic trial and a cadaver is a dead body. Do you see where this is going?

Stephen VII dug up Formosus, hauled his corpse onto the papal throne, and sought to put it on trial for its crimes. Stephen VII represented the prosecution and Formosus, with the help of a teenage deacon hiding behind the throne, defended himself.

Stephen VII would scream and read out charges, stomping around the throne and playing to the audience. When he would stop screaming the teenage deacon would speak from behind the throne in an imitation of Formosus's voice and deny the charges. Things did not go well for Formosus, proving the old adage that you should never posthumously defend yourself in court and use a teenager as a proxy.

Formosus was found guilty and Stephen VII ordered his fingers cut off, his body stripped of papal vestments and dressed in rags, and reinterred in a pauper's grave. Stephen VII soon after decided this was inadequate and had the corpse dug up again, tied with stones, and thrown into the Tiber river. A monk rescued the corpse.

Stephen VII was considered completely insane by the people of Rome and riots boiled over in the coming months. Stephen VII was stripped of his vestments, imprisoned, and strangled. Incredibly, it took three further synods (sans corpse) to vindicate Formosus and to this day popes will not take his name.

Background: If greed is good, then Alexander VI was the best pope. He literally bought his way into becoming pope, bankrolled by France and Genoa and his own merchant family. 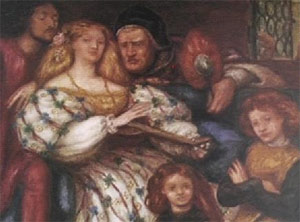 Lucrezia and some of Alexander's many spawn.Why He is Awful: Alexander VI became the Halliburton and Dick Cheney of the papacy, swindling his way onto the throne with cash and selling the papacy a piece at a time to warring empires in Europe. While he was raking in the wealth and involving the Holy See in French and Italian political intrigues, he was also amassing women and power for his family.

One of his most infamous stunts was to use his attractive daughter Lucrezia, whom he supposedly had an affair with, as bait for wealthy merchants. When a rich merchant prince would visit Rome Alexander VI would introduce his daughter, have her seduce them, and then marry his daughter off to the merchant for a vast dowry. Unfortunately for the merchant, Alexander VI was the pope and got to decide who was married and who wasn't married. As soon as a wealthier merchant rolled into Rome Lucrezia's marriage would end and she would become available to the next highest bidder.

Alexander VI was also wildly unpopular with devout Catholics because he never made any attempt to be religious. He was a 100% secular pope, ignoring all of the rules and traditions of the church. He married, had children, and sired countless children outside of marriage.

According to historian William Manchester, "Servants kept score of each man's orgasms, for the pope greatly admired virility and measured a man's machismo by his ejaculative capacity."

When Alexander VI's political intrigues ran him into financial trouble, he instituted a brutal pogrom against the wealthy, confiscating riches under the thin guise of criminal enforcement. If the wealthy resisted they were put to death. These pogroms fueled instability and eventually led to Alexander's involvement in a series of unfortunate military struggles. Assassins, paid by Alexander's many enemies, made repeated attempts on him. In 1503 they finally succeeded with a plate of poisoned food.

"Alexander VI's stomach became swollen and turned to liquid, while his face became wine-coloured and his skin began to peel off. Finally his stomach and bowels bled profusely."

Alexander VI died soon after the poisoning. His last words were, "Wait a minute."