Before the Internet I liked pirates, I liked ninjas, and I liked zombies. It turns out everyone else in the galaxy felt the exact same way and has spent the last 15 years on the Internet ramming all three (with the possible additions of monkeys and robots) down our throats as if they are god's gift to comedy. 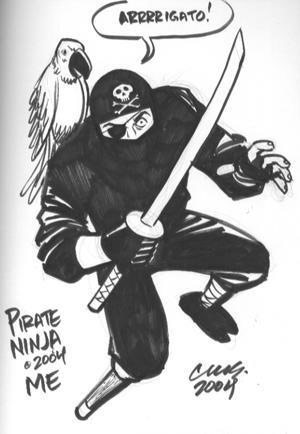 Pirates, ninjas, and zombies are not inherently funny. Adding them to something does not automatically make it better. To the contrary, the three have been so abused by Internet writers and comedians that mentioning any of the three is anathema to laughter. They are burdens to be overcome by the humor.

If you think differently, if you honestly believe any of these things are automatically funny, I have some grave news for you. I'll deliver the news in a pirate Maddox style so you can appreciate it:

You are fuckdumb as a shit in a pant.

Some comedy does prevail despite the pirates, ninjas, and zombies being stacked against it. Shaun of the Dead was hilarious, for example. You might want to note that it was actually a major motion picture and not a blog called "Zombie Robot: The Ninja Pirates" or a web comic about Jesus and Chuck Norris fighting a zombie apocalypse.