These days there is a lot to dislike about Sonic the Hedgehog. Gone are the fun games, gone is the endearing character with a little bit of attitude. The Sega games have grown worse with each generation of consoles and his character more bizarre. He's been in multiple unwatchable cartoons and appeared in a number of mediocre comics. Sonic and his supporting cast of dozens of annoying characters generated by Sega rule over a rickety media empire of excrement. 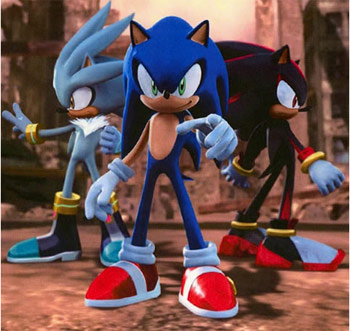 It would all be pretty routine for a 90s era gaming franchise on its last legs, if it weren't for the way it has translated onto the Internet. To find the real nightmare Sonic the Hedgehog has wrought you need only log onto your computer and open up your Internet browser. His fans have vomited their inner filth onto the web for everyone to see.

Sonic the Hedgehog fans fall into one or more of three categories. I have outlined them in this easy-to-understand Venn diagram. 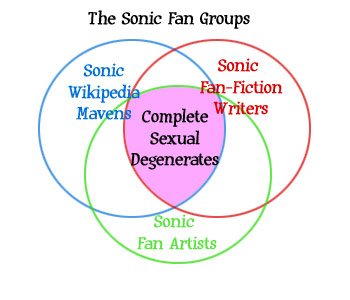 Sonic's Wikipedia fan base has corrupted the web 2.0 encyclopedia with a staggering amount of useless information. More than 200 Sonic the Hedgehog-related articles detail every possible character and bit of minutiae in his universe.

Many of these articles explore topics totally without merit to anyone that is not researching Sonic the Hedgehog for a graduate-level research paper. Did you know, for example, that Silver the Hedgehog is 100 centimeters tall? Of course you didn't know that, because you aren't motherfucking insane.

The other two segments of Sonic's fan base spend just as much time obsessing over Sonic, but rather than spend that time cataloging the weight of minor characters, they use their creativity to write stories and draw pictures of Sonic and friends. 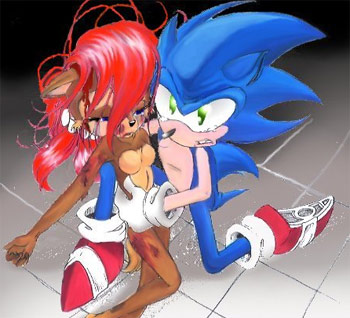 Once fans have devoted thousands of hours to sketching out Sonic the Hedgehog, writing their 600-page Sonic novel, and fighting a 20-day edit war of attrition over the major waterways of Angel Island, they might think they have nothing left to give to Sonic the Hedgehog. Think again.

I will allow this very simple diagram to explain a Sonic the Hedgehog fan's evolution.


By that point the fans are heavily involved in all three spheres of the fan base. They know every possible scrap and nugget of information about Sonic, so it's time for them to start exploring that undiscovered country. They begin to integrate their own sexuality into the universe they believe they have helped to enrich. They start posing and answering questions like, "How would Sonic rape Tails?" or "What if Eggman built a robot that could triple-penetrate Cream the Rabbit?"

The Internet is awash in these misguided fantasies. In their towers of loneliness they have sought out sexual gratification in a children's character that could never possibly grant it. In the real world they couldn't even find anything resembling that sexual fantasy...outside the furry fan base.

And that, ladies and gentleman, is why Sonic the Hedgehog belongs on the list.