Sorry, Japan, despite all of your fan boys and the myriad horrors you have unleashed upon the internet, your xenophobia and addiction to console gaming has robbed you of the prize. it's quiet and unassuming South Korea that gets top honors, thanks mainly to Korea's massive PC-gaming culture. They show Starcraft matches on TV. 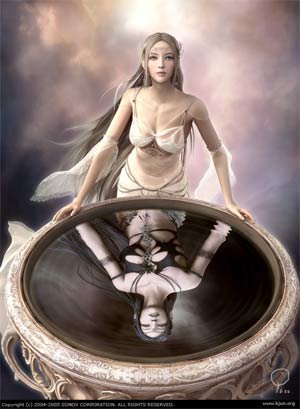 Concept art from the Korean MMO Doubleboob Spellstrikers.
This nation of around 49 million leads the world in semi-conductors, ship building, and Massively Multiplayer Online Gaming. An MMO is released in Korea every 73 seconds and to date more than 650,000 MMOs have been released.

Here are just a few of the MMO titles released in the past few years in Korea:

Americans and various Europeans have frequently joined these games despite a lack of English support, enjoying an experience that blends generic settings, terrible gameplay, and a vibrant community of angry Korean players speaking in crazy little man symbols. 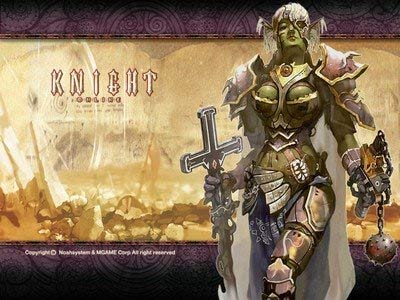 Koreans have done plenty of their own crossing over, participating in the North American releases of games like Guild Wars and World of Warcraft. They'll stop by to say hello with a friendly "america george bush suck 911 911" or "america die kekeke."

What's infuriating about the Koreans is that they are almost invariably better at the games than the Americans. I'm not one to assume racial superiority or extra bones in their carpal tunnels or whatever, but I think they've certainly developed a culture that celebrates - even reveres - gamers to an extent only matched by their specific dislike for the United States.

In other words, they have the ability and the will to ruin online gaming, and in many cases they do it. Their nation is currently producing a generation of super-soldiers designed to ruin the Internet enjoyment of the West. They will out-grind you in every MMO, devise the perfect build order in every major RTS, and out-snipe your noggin' in the latest FPS game.

For Korea's ability to ruin all non-pornographic fun on the Internet, I bestow upon them the number one spot in the Most Awful Things to Happen to the Internet.

Good on ya, Korea!