If fonts seem like a strange inclusion for such a high level on the list then you haven't been hanging out on enough Internet forums (like there could ever be enough of those!) or reading enough web comics. These two fonts are nearly ubiquitous and say to the reader, "Fuck it all, I hate myself and I'm not even going to bother trying. I want to die and I probably want to molest a baby."

Impact is the font du jour of the image macro. It's bold, it's blocky, and many believe it belongs in all caps above the head of a cat. Here's a quick example I have created specifically for your un-enjoyment. 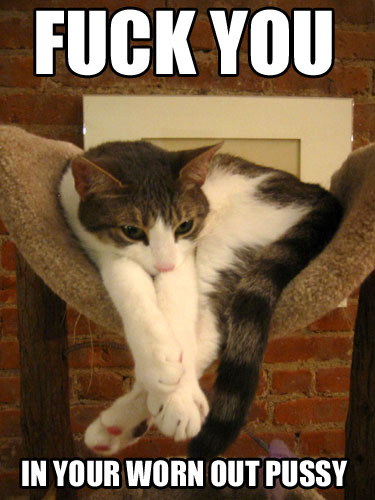 Comic Sans is perhaps even more widely seen, and has become a favorite of every single Internet user starting their first web comic. It is ugly, lifeless, and about as comical as a gas leak at Union Carbide. Like Impact it indicates a complete lack of imagination and effort. I have used the font in conjunction with a Garfield
comic to showcase that something can make a Garfield comic worse than Jim Davis.

As you can clearly see Comic Sans is hate made font, a milquetoast stab into your brain that will burn away all that makes you human. Turn away now, turn away from the dark paths of Impact and Comic Sans, or forever damn yourself to mediocrity.