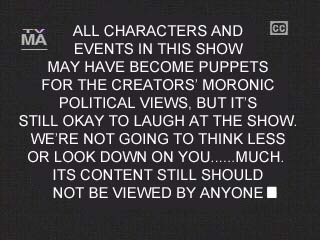 The last time I took a jab at South Park a bunch of humorless South Park fans sent me multi-page emails bellyaching over how hurt their feelings were that I made fun of their cartoon. With that in mind I'll go ahead and reiterate the point of the disclaimer: there is nothing wrong with finding South Park funny. If you laugh at it and enjoy it then good for you. God knows something has to keep you people dull and pacified lest you rise up from your subterranean warrens and fill the streets of our world with your shuffling stink.

In 2001, gay Republican political writer Andrew Sullivan began championing the phrase "South Park Republicans". I'll go ahead and overlook the comedic irony inherent in an openly homosexual political writer being (at the time at least) a Republican and move on to the term he helped popularize. It was intended to describe the adult children, trainables, and one or two women who enjoy South Park and ascribe to the same quasi-libertarian views as Trey Parker and Matt Stone.

These views are evidenced by the show clearly mocking both liberals and conservatives and by central characters espousing subtle and nuanced political positions in nearly every episode like "both sides are wrong" and "the answer is somewhere in between."

For example, on an episode of South Park ridiculous Hollywood liberals may want to prevent a homosexual from being murdered and conservatives portrayed on the show might want the homosexual murdered. The South Park Republican would therefore believe that the homosexual should be half-murdered. This would be clearly enumerated in a two-minute speech given by Stan in a segment at the end of the episode that used to be parody but has now become "political speech, with jokes."

"Fine, South Park sucks, whatever. That doesn't explain what it's doing on a list about the Internet!"

Whoa, whoa, whoa, hold your objects, John Galt! The relationship is simple. South Park grew to popularity at around the same time as the web. While the "South Park Republican" label has fallen by the wayside, Parker and Stone have declared themselves libertarians and continue to support libertarian causes and political views. No two people have done more to contribute to the rise in relevance of the political label I created years back: "The Cyber Libertarian."

Entitled, white, anti-social, and probably from a wealthy family, Cyber Libertarians are the most unspeakably vile breed of political activist you are likely to encounter on the Internet. All of them are either in law school, pretend to be lawyers, or fantasize about being lawyers, and they invariably while away their parent's tuition money playing MMOs and arguing their politics on forums and blogs across the Internet. 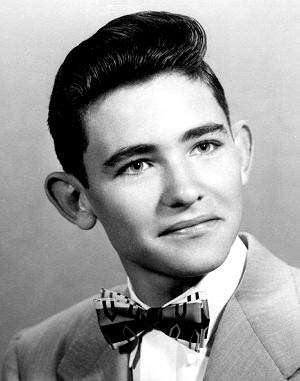 They are a breed of nihilists who circle like flies around malodorous causes, eager to pick the winning side, fearful to commit to anything beyond intangible principles. When their cause of the moment is proven wrong they are craven, but unapologetic. When they are right they are triumphant and gloating, parading across the Internet and demanding accolades.

The typical Cyber Libertarian supported the Iraq war until the moment the polls turned sour and deflects difficult issues of social libertarianism by crying "state's rights!" They lack all human empathy, are perfectly happy to return to segregation as long as it doesn't raise their taxes, and have almost invariably never gone without for a single day of their lives. They probably suffer from self-diagnosed Asperger's Syndrome, but don't we all.

These are the monsters weaned on South Park, the scions of the Internet Age. The Cyber Libertarians will one day rule the Internet, and they may just get Ron Paul up to four percent in the polls!