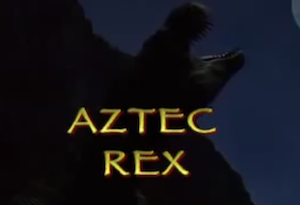 Overview: Some conquistadors land in South America for a bit of light pillaging, but the local Aztec village has a bit of a T-rex infestation.

The Case Against: Production values that rival a mid-series, C- episode of Hercules: The Legendary Journeys, which just makes the fact that this movie takes itself 100% seriously even more jarring. 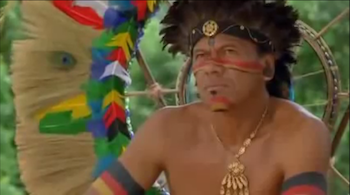 Aztec Rex, also known as Tyrannosaurus Azteca - which they quickly changed because it sounded too much like a foreign film[1] - is a movie that has no reason to exist. You have to really be scraping through the bottom of the barrel of hypothetical movie fights before you get to "T-rex vs. Spanish conquistadors", which is well below "sloth vs. manatee" and "Sinbad the comedian vs. Sinbad the mythical figure" on anyone's list. And if you were looking for a thoughtful historical piece about the conflict between the Spanish and the Aztecs, you might want to hold out for something with a more nuanced picture of the Aztec civilization than "wore loincloths, liked human sacrifice, had a remarkable calendar."

Well, maybe there's one reason Aztec Rex exists, since it was shot entirely on location in Hawaii, and we can just picture the conversation that led to that. "Alright, who's excited to go shoot this movie about ancient Aztecs on location! Wait, they lived where? Some crappy jungles in Mexico? Fuck that, let's just shoot in Hawaii instead. I know it's more expensive, we'll just take it out of the CGI budget or something." Speaking of, we really have to start with the CGI dinosaur in the room. We'll admit to having seen worse fake movie monsters, but our main complaint is that as dinosaurs go, the two T-Aztec-Rexes we're given here are pretty poor examples. Just watch how the first one dies:

That wasn't a clever plan to outwit a giant killing machine so much as it was assisted dino-suicide. We also like how the T-rex is impervious to guns and even that goddamn cannonball just bounces right off, but it's no match for the ultimate weapon: a shallow ditch with some pointy sticks. This is especially funny, since everyone spends the rest of the movie complaining about how they don't have enough firepower to kill the other one, and that "swords and crossbows will never defeat the beast!" Oh, if only the Aztecs had mastered the hyper-advanced technology of sharpened sticks, they wouldn't have to constantly sacrifice people to bloodthirsty monsters. Thank God the Spanish came along to share their knowledge of sticks with them, and also to kill them and steal all their shit, but the stick thing too.

The thing is, Aztec Rex isn't really about the dinosaurs at all. You could remove them entirely, and you'd still be left with basically a complete movie without changing most of the scenes at all. Still not a good movie, of course - it turns out that the political machinations and romantic interests of a tiny Aztec tribe with like three people in it doesn't hold up a 90-minute movie very well. Will the chieftain's daughter marry the Spaniard with a heart of gold who saves her life repeatedly, or the shaman whose hobby is cutting the beating hearts out of people and feeding them to dinosaurs like the world's least family-friendly petting zoo? What an inner struggle that must be for her.

As much as the dinos are a welcome distraction from that, sometimes their presence is actively making the movie stupider, like when the one good conquistador asks the chief's daughter to marry him while they're hiding under some trees from a T-rex that just almost killed them. "Oh darling, will you marry me, in the eyes of God and this giant cold-blooded killing machine looming over us?" And not only does she say yes, they consummate the marriage then and there, never mind the giant deadly lizard or the fat priest who is standing to one side awkwardly.

Did we mention yet that the guy leading the conquistadors is Cortes, yes, that Cortes? There's even a little narration at the very end of the movie that explains how Cortes eventually came back and conquered the entire Aztec empire, and he learned about the value of alliances with the locals from his dinosaur adventure. Which is a really nice touch, because you definitely want your movie about Spanish soldiers fighting against goddamn dinosaurs to be as historically grounded as possible. Oh, and the fat priest whose existence was basically a plot device so that the natives could talk to the Spanish? He went on to invent sangria. So every time you drink sangria, think of T-rexes tearing people in half, because that's where it came from! Or don't, because that's fucking stupid.

[1] Because a movie with a Spanish title which is in Engilsh is just too much of a mindfuck, especially for the kind of person who actually watches mid-afternoon SyFy channel original movies voluntarily.