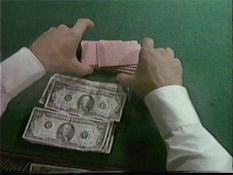 GO GO JOE DON BAKER STUNTHANDS!As expected, Ron gambles the HELL out of the other players and ends up cleaning house, something which I'm sure he's never done before. Apparently Ron's secret lies in the fact that whenever he's dealing cards he employs a pair of stunt arms to stand in and flip them around for a few minutes, making him look like a pro. To try and trick the audience into thinking Ron is actually dealing the cards, the film cuts to shots of Ron smoking a cigar and looking down, which is just a phenomenally convincing effect. Ron brings back a few gazillion dollars and tells his wife / girlfriend / lover / medical test subject that he's investing it all in a Las Vegas hotel. She responds by making "excited" noises, as this implies Ron will finally quit his job of sitting in a chair, smoking a cigar, drinking, and gambling all day. Now he'll just sit in a chair, smoke cigars, drink, and NOT gamble all day. He'll also do it Las Vegas too, which is the capital city of NOT gambling.

Ron wedges his oversized ass into his car and drives home, but is shocked to discover that the road is blocked by a couple of vintage 1970's sports cars (which seem to have been quite popular back then). Okay, well maybe he wasn't really "shocked", but his mouth kind of moved a bit down and he furrowed his eyes a bit, which is about the best Baker can do under the circumstances of having a face which weighs more than a fully furnished mobile home. A gunman suddenly jumps out of the bushes, shoots out Ron's tire, and drives off. That signals the end of the "action" scene; any more and Baker's heart would've undoubtedly given out. Ron repairs the tire and drives home.

When he reaches his vintage 1970's-decor style home, a police officer appears in his garage and starts hasslin' him. The cop tells Ron to get in the car because he's going to be "taken to the morgue", which is a common visual mistake to many outsiders. Joe Don Baker may look like a pale, lifeless, bloated corpse, his acting skills may rival a dead person, and the stench emanating from his armpits may reek of bodily decay, but he... wait, where was I going with this?

Ron does the only logical thing to do when questioned by a police officer -- he turns around and starts beating the shit out of him. After a particularly grotesque battle scene which features two doughy guys slapping each other in the face and wrestling in a garage, Ron manages to defeat the cop by bashing his (the cop's) skull against the pavement. Ron passes out and the police come to the scene of the crime, whisking the slain cop off to the mortuary and taking Ron to the nearby prison hospital. The police chief grabs Ron's satchel of cash he won from the previous gambling scene, puts it in the back of his cruiser, and says, "This is gambling money. Gambling is illegal in this state. This money is money from gambling. Therefore this money never existed." The other cop gives him a confused look while the chief laughs like a delusional maniac for a few minutes, overjoyed that the gambling money from gambling with gamblers won't be used to gamble anymore.

Baker awakens in the prison hospital a few days or maybe years later, with bandages covering most of his head (so his face wouldn't traumatize the other patients, I assume). His lawyer appears and starts claiming that Ron should make a deal with the District Attorney or else he'll be sent to prison for a life sentence. Ron, who maintains his innocence despite the fact that he really DID kill a cop and he WASN'T framed at all, calls his wife / girlfriend / lover / trained Rhesus monkey and asks her to get some Private Detectives. However, the crooked Police Chief doesn't want her calling any outside help, so he sends a couple hired goons to intimidate her by making scary faces and mumbling their lines in her general direction. As a result, Ron is forced to make a deal with the DA and go to prison for five to ten years, with a reduced sentence if he promises not to eat the other prisoners' dinner.

Ron is shipped off to jail and the film goes from bad to worse when it cuts to a tender and touching scene of JOE DON BAKER SHOWERING. IN THE NUDE. IN THE GODDAMN NUDE. Believe me, folks, I was trying to rub my brain against a scrubbing board after sitting through this horrific scene. The prison guard, who (for some ungodly reason) was staring at Ron showering the entire time, starts poking him with a mop handle. Ron goes ballistic, breaks the mop in half, and threatens to kill the guard with the broken handle. Since the guard was pinned under a naked Joe Don Baker and his brain was undoubtedly paralyzed in fear, he agrees to give Ron more showering time. I don't blame him; scientists estimate that it would take the entire Pacific Ocean to get Joe Don Baker completely wet.

Ron is escorted back to his prison cell after the previous horrendous scene. Once safely locked away, all the guards rush over to throw tear gas canisters into his cell and spray him with mace. Now that I think about it, they could've been dousing him with deodorant, as Baker would undoubtedly react more violently to any kind of antiperspirant which covers up his natural odor of "bacon and cheddar." Ron ends up in the prison hospital again where he's noticed by the local jail crime boss, Sal Viccarrone. Sal keeps Ron from being tossed into solitary confinement and asks Ron to gamble for him in the prison yard. Apparently Sal controls the entire jail system and wants Ron on his team so they can gamble the hell out of the other prisoners. Or maybe Sal wanted the one man on Earth who was actually even more vile looking than he was. Pick a motive, any motive.