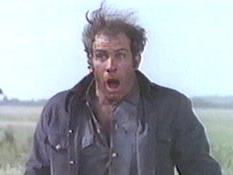 That's right, suckah, Joe Don's gonna KILL YOU!Ron eventually waddles his humongous ass to the state capitol where he kidnaps Senator Tatum, drives him to a lake, and starts to drown him. Tatum reveals various crucial plotpoints that would supposedly explain the movie, but they're all drowned out by the sound effects of him thrashing in the water. There's no better way to add a special spark of "mystery" to a film than by removing key words and phrases from it!

Vince and Ron decide that this movie has rotted away long enough and should promptly come to an end. They raid the house of some guy named "Morello" who is either the police chief or the mayor or the president or an astronaut or something, and they end up killing him and two more police officers on guard duty. Oh yeah, and Vince dies too. However, Ron gets back his satchel of five dollar bills that he won in the beginning of the movie so hey, it was all worth it! He travels back home, tells his wife that he has the money, and the movie just... stops. The end. Ron's brutal killing spree, which has left about 87 people dead, is halted only by the end of recordable film. What a way to go!

While "Framed" was not nearly as comical or lighthearted as "Mitchell", it more than made up for it in the "sheer revulsion" factor. Joe Don Baker is even more grotesque than ever in this award-losing flop of cinematic wasteland. Nothing about this movie makes any sense, ranging from the laughably incoherent plot to the title of the film; Baker wasn't even framed at all, goddammit! Why the hell did they even name this film "Framed" if it's not about anybody being framed? For God's sake, there's not a picture in existence large enough to frame all of Joe Don Baker! This is a bad, bad, bad film and is not even worth renting for comedic purposes. Stay away at all costs.

And, Jesus Christ, Joe Don Baker NAKED. Do I need to even say any more?