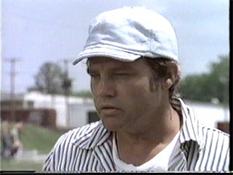 Baker doesn't look that good in prison clothing. But hell, at least he's IN clothing.Ron starts gambling like a madman, calling the guy with the stunt hands to perform faster than ever. He brings in over $2000 a day to Sal, implying that the prison is either really, really large or full of really, really rich people. Soon Sal starts getting Ron to collect bets on baseball games, and Sal is almost killed by an assailant wielding a crude knife. Ron steps in and squeezes his mile-long love handles in between the attacker and Sal, causing him to intercept the knife in his doughy backside. He ends up in the prison hospital again, where he would just never leave if he had an ounce of intelligence.

Once out of the hospital, Ron goes to lunch (surprise) and gets in a fight with a guard, landing him in solitary confinement. Baker gives a riveting performance here by talking to a roach for a good five minutes. Also, there's approximately 10 sinks in his cell, which is a pretty heavy hint that the penal system wants Ron to engage in some form of personal hygiene.

Ron is eventually let free from solitary confinement and he takes the opportunity to continue gambling and making money. Sal swings by to let Ron know that he's being released from prison, and he'll fix it so that Ron will be released as well when his next parole board meeting comes up. I don't think that Sal had to use his "power and influence" to make this happen; he merely told the parole board that if they didn't let Ron go they'd be forced to see his misshapen, ugly skull twice a year for his parole hearings. The members who didn't commit suicide at that point decided to let him go.

As soon as Ron steps off the prison bus and lands his large ass out of jail, he begins his plans to become a productive member of society. These plans include killing a lot of Police officers, county officials, and various other people. To quote Ron, "somebody I don't even know took everything I had away from me. I'm going to make them pay. Double. Two for one." Apparently the "everything I had" was just the bag of illegal money he made while gambling illegally, because his wife and car and house are all still there when he gets back. I think Joe Don Baker just has a flair for the dramatic, like when he's caught shouting, "If I don't get another truckload of Twinkie's in my tanker truck-sized stomach, I'm jus' gunna DIE here!!!"

Ron soon learns that officer Nate Bigford, played by somebody who looks a lot like Jessie "The Body" Ventura, is out to make his life a living hell. No, not because Ron is a big, lumbering, hulking, ugly slob, but because the cop Ron killed was Bigford's cousin. Oh yeah, and the "lumbering slob" thing too, but I think it was mainly because of the dead cousin factor. Since Bigford is larger than Ron, Ron takes the opportunity to throw an endless supply of fat jokes at the guy, despite the fact that Bigford's neck contains more muscle mass than Joe Don Baker will EVER have. This also marks the first time in history that Joe Don Baker was in a position to make fat jokes that weren't directed at himself. Bigford makes comical quips back at Ron, saying hilarious things like, "Ronald S. Lewis - the 'S' is for 'Stinks'!" I can't imagine why this movie didn't win several major awards for the writing alone.

Sergeant Sam Perry meets up with Ron later in the evening, supplying some critical information to aid Baker's dreams of bloodlust. It turns out that on the night Ron murdered the police officer, somebody changed the log files at the Police station! Oooh! Also, one of the cars that blocked his way that night belonged to the state Senator's son! Aaah! Somebody call the plot-thickening police -- this baby's gonna blow!

Vince, one of Ron's non-homosexual buddies from prison, appears in Ron's house to kill him, but decides not to because they're such good friends and all. He reveals that somebody put a price out on Ron's head and hired Vince to knock him off! I would guess it's the company that had the last "free Continental breakfast included" deal when Baker was in town. Vince and Ron head off to a local bar so they can chat about NOT killing each other, and big ol' Nate Bigford shows up and threatens to beat up Ron. He escapes from the situation by walking outside of the bar and watching Vince push some bricks on top of Nate's head, causing him to spastically convulse in pain.

Ron travels back to his home and is greeted by Sergeant Sam Perry and some hitman, both of whom immediately come running out of his house on the exact cue. Perry manages to kill the two assailants in one of the most stupid and pointless "action" scenes ever contrived. The next day, at the Police station, Ron is questioned about last night's shooting. Since Baker can only play characters who are total fat-asses -- oops, I mean "bad" asses -- no wait, I did mean "fat-asses" -- he refuses to give any information at all about the shooting and instead cleverly changes the topic to eating breakfast. Yes, he goes on a tirade about eating breakfast. In the police station. I don't know why, so don't ask.

On his way home, he's flagged down by Sergeant Perry again who provides him with even more information since Ron is incapable of figuring ANYTHING out unless it's thoroughly explained to him by somebody else. Perry insists that the key to this whole mess is Senator Tatum. Who's Senator Tatum? I have no idea. Why is he so crucial in this film? You got me. The movie basically just says "HE'S SENATOR TATUM and that's explanation enough, so accept it and move on or we'll throw in another shower scene!" Ron is later ambushed by three ugly thugs who are killed when Ron forces a train to hit their car. He dispenses of the final thug by shooting off the guy's ear with a handgun, sticking a heated spark plug in his other ear, and ultimately shooting him in the stomach. What an action hero!