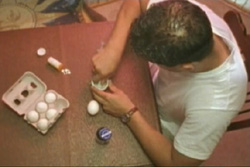 "Hunting Humans" starts like every other thriller movie featuring a serial killer starts: With someone being murdered. Our killer, Aric (we know his name is spelled like that because he goes out of his way to tell us) gives us a little internal monologue as the plainest-looking girl in the world climbs up some stairs.

"She's going to let the dog out now," he says. "I have been interpreting her behavior. I know her patterns. I've been hunting humans a long time now."

Okay, before we go on: Who references their movie's name on the first fucking line of the movie? Who in his right mind would think "hey, I will just have my character casually drop the movie's name within twenty seconds of the movie starting and nobody will think it's a pretentious, masturbatory, self-indulgent bunch of bullshit?" Well, ladies and gents, that person is Kevin Kangas. Give yourself a hand, Kevin. You're a douchebag.

So, of course the girl gets naked, and of course Aric (played by Rick Ganz) jumps out of the shower and stabs her a few times. After tying her dead body up in the shower he washes off and takes a little time to think.

"It's kind of like a reverse 'Psycho,' if you think about it," he says.

You see, Aric is not like those other serial killers on those other thriller movies. Instead of being an incredibly smart, cunning killer, Aric is an incredibly smart, cunning killer who also happens to be a horrible actor. I am pretty sure that, when Kangas decided to sit down and make a movie, he did so with the help of some kind of "So You Wanna Write a Thriller" book he checked out on his mom's library card.

I think it's time to chat with the would-be movie makers reading this review. Generally, there is a right way and a wrong way to create a serial killer in a psychological thriller like "Hunting Humans." Maybe you're thinking about writing a better, faster, more entertaining serial killer movie. Maybe you want to do it "with a twist." Maybe you have characters fleshed out already and you're getting ready to turn the world of thrillers on its ear.

If I can abuse my bulleted list powers one more time, I have compiled a checklist of things the aspiring director should pay close attention to in the creation of his magnum opus:

If you see your character in one or more of these descriptions, chances are you are Kevin Kangas. In that case, congratulations, Kevin, you're still a douchebag.