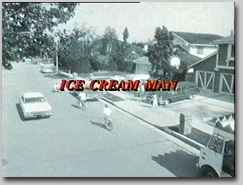 Overview: An ice cream man terrorizes a small town of braindead yahoos. Only a group of four children know the horrible secret behind the ice cream man's favorite pastime (murdering things), so they try to stop him by enlisting the aid of that one guy from "Airwolf".

The Case For: I can't think of any reasons offhand. Check back in a month or so.

The Case Against: The sheer, intense, unimaginable level of the adults' stupidity is simply mind-boggling. Oh yeah, the entire video is about an ice cream man that kills people. 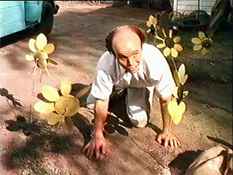 There's nothing scarier than a balding ice cream salesman crouching amongst plastic flowers.

i·ro·ny: The use of words to express something different from and often opposite to their literal meaning. Incongruity between what might be expected and what actually occurs.

Oh, bittersweet irony. "The Ice Cream Man" is just crammed full of irony, tighter than Jenna Jameson at a cucumber growing competition. You see, ice cream men are traditionally seen as kind and caring people, catering to joyous children far and wide. They're a link to the past, when ice cream men roved the streets in Anytown, USA, handing out orange popsicles and smiles to happy little white boys and girls who knew how to duck and cover. So what could be more moronic - er, I mean ironic - than an ice cream man who's actually evil and kills people? I'm sure I can name a thousand things offhand, but hell, the director obviously had an ice cream man costume laying around the attic, so why the fuck shouldn't he be able to base a movie around it?

The video begins in the mid 1950's, at least I assume, as the director uses a brown filter and whenever these kind of movies use brown filters it means either: 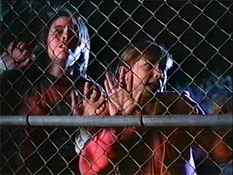 The heroes of the film. They don't quite understand how fences work.

I personally would've rather had this movie be in the future, because a story about an ice cream man in the year 2500 would just kick ass. He'd be slaughtered by raving mutants within minutes! And the video would instantly be over! Yay!

However, this movie did show some promise when the ice cream man immediately gets gunned down by some random people that drive by in a car. A small boy sits down next to the bloody corpse and sadly asks, "Who's going to bring me an ice cream, mommy?" Acceptable answers the mom could've responded with include "This rotting, bloody corpse, honey" or "Step over the dead guy and get it yourself, you dumb shit" but instead she chose to scream in horror. Wuss.

Cut to the current year. We can tell it's the present time, or at least the present time if it were 1994, because some kid is playing a video game which involves repeatedly pressing a single key on the keyboard. The ringing bells of the ice cream man soon lures children from their house in the thousands, and they swarm over to stare at pictures of the Teenage Mutant Ninja Turtles on the side of the van. The ice cream man, who resembles a fat, bloated, less attractive Eddie Munster, gets some change from a kid and puts it into his secret "ooh, icky, gross, look, this guy's a psycho" bucket inside the van, which also contains a white mouse, plastic roach, and tooth. I guess the kids in the area have different forms of currency than the rest of us.

Anyway, a funloving group of children who call themselves "The Rocketeers", decide to go to the park. Surprisingly enough, not a single one of the kids had a black eye or swelling anywhere on their faces. I would've assumed with such a fucking lame name as "The Rocketeers" that these kids would've been beaten up every second of the day. Or at least have their stupid rockets shoved up their asses. 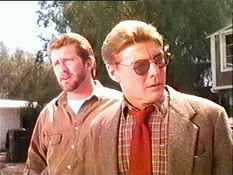 The only expression that one guy from "Airwolf" has.

They decide to go to the park, and the fat kid of the group, who was lagging behind them the entire way, trips and falls into a sandbox. This is funny because fat people are just so stupid! Ha ha! The chubby boy drops his popsicle into the sand, picks it back up, and begins to eat it again! Ha ha, fat people will eat anything! This is because they're so stupid and deserve our constant ridicule. The gang spies the ice cream man hanging around the area, who quickly grabs the park ranger (he looks like some kind of homeless vagrant, which explains how they found the cast for this film) and kills him by doing... uh... something. I'm not sure how he kills him, he just does. Then a dog starts barking, so he stabs it with some kind of knife-popsicle-icepick-thing, which he then throws into a meat grinder (the dog, not the weapon). After such a hard night of serving ice cream and murdering pets, the evil ice cream man goes to sleep on a patch of dirt outside a trailer. I'd imagine that this was because it's hard to afford a nice place to live when you're payed in teeth and rats.

So the "Rocketeers" head to the Police (oh yeah, one of the detectives is played by the guy from "Airwolf") who grill the ice cream man with the following heated and intense interrogation:

Police: "We're looking for some missing kids. Do you know anything about them?"