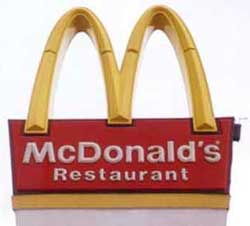 The headquarters of the rebel alliance. GO TEAM!Moments later, Eric emerges from the house with what appears to be an enormous, pulsating pile of crap with arms and legs in his lap. As it turns out, in the 20 seconds between him sending out Frizz-Girl and coming out himself, he has found an enormous teddy bear from which he has removed the stuffing. He re-stuffs the bear's skin with his alien love-slave and they pile into the car together and head off to McDonald's. In the parking lot of the restaurant, a lovely 80's-style dance routine is taking place complete with leg-warmers, jelly shoes, ruffled skirts, and headbands. The kids and walking cat vomit enter the place and we immediately see that the restaurant is packed with kids, ballerinas, and homosexual football players. I repeat: BALLERINAS. HOMOSEXUAL FOOTBALL PLAYERS.

The kid wheels his cripple-chair on up to the table with his bear and Ronald McDonald appears from the putrid nether-regions of despair and terror to say, "Hey kid, nice bear," only to vanish in a haze of smoke and vaguely homoerotic balloon animals. At this point the bear-creature sees cups of none other than Coca-Cola brand cola on the table and suddenly its arm explodes out from the sleeve of the costume in a horrifying parody of a rubbery back-scratcher, extending itself four feet across the table to grab a soda. The kids at the table gasp and suddenly a music number starts. The alien bear is placed on the countertop and the next 10 minutes are spent in psychedelic 80's hell. While the people and freak are dancing happily to celebrate the eventual coronary infarction that will be caused by their eating such nutritious foods, some evil government people attempt to break through the crowd and get the alien. They are, of course, unsuccessful, as you just can't stop the rockin'.

Eric and the Frizzy Dilemma become aware of the guv'ment threat and they conspire to get their alien out of McDonald's almost against its will (shockingly, it REALLY likes McDonald's). Eric makes a break for it with the alien misfortune on his lap. The government people follow in hot pursuit, somehow unable to keep up with the kid's wheelchair. Cars pull out of seemingly invisible driveways as they race down the street, and Eric narrowly escapes by grabbing onto the bumper of a passing truck a la "Back to the Future" and is pulled along to high-speed safety. Eric's mother works at the local Sears, so Eric makes his way there with the g-men on his tail. What ensues is another nauseating attempt at overt product-placement YAY SEARS I LOVE SEARS SEARS IS A HAPPY PLACE FULL OF CANDY AND SUNSHINE AND LOVE. Once inside Sears, the Mysterious Alien Creature suddenly unveils his power to make TV's explode and doors seal shut of their own accord, slowing down the government people a bit while Eric's ditzy broad mother screams shrilly, "ERRRRRIIIIIIIIIIIIIIIIC!! EEERRRRRRRIIIIIIIIIIC!!!!!!!!!!" Just as it appears that Eric will be caught, Eric's older brother zooms out of nowhere with his driver's license and the family mini-van. He picks Eric and the tumor-bag up, wheelchair and all, and speeds away into the sunset. Sort of. Only in this case the sunset is actually yet another contrived marketing gimmick involving feeding the creature Skittles. Oh, if only I were kidding.

The van full of society's brightest hope rolls down the road on cue from the Mysterious Alien Creature. With its help, the humans are led to the remote place in the desert where the alien family has taken refuge. They are shocked to see an enormous Valvoline billboard and realize that the alien had been trying to tell them to go here all along but they were to busy eating yogurt to really notice anything. They round up the freakish alien family and herd them into the van which at this point should have exploded to save the world from any further rape and plunder of human consciousness. They stop for gas at a rural station, at which point the hideously deformed alien retard brigade causes much commotion when it attempts to be friendly-like with the locals. The aliens get out of the van and wander drunkenly into a grocery store to buy or steal (you're not going to believe this) Coke. A security guard brandishes a gun and tells them to halt, but those crazy aliens don't understand his gibberish language because they are from a planet where the only acceptable form of communication are bizarre hand-signals and whistling with freaking non-lips. The guard backs down and the father-alien ends up with the gun in it's mutant, back-scratcher hand. Just as the aliens walk out of the store, UH OH, HERE COMES THE EVIL GOVERNMENT TO MAKE THINGS BLOW UP AND SHOOT GUNS AT OTHER THINGS!!