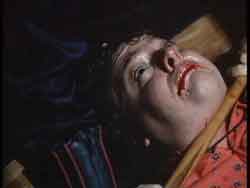 The killer has some difficulty navigating the pool cue around Russell's chins.Tired of waiting for Lisa to bring him a drink, D.B. goes to the kitchen to makes himself a sandwich. He is grossed out by the mangled hamburger on the grill. The body doesn't phase him in the least. While D.B.'s gone, Russell takes the opportunity to put on crappy music and dance on the pool table like an idiot. Finally, someone kills him by strangling him with a pool cue. It looks like the movie may have a happy ending after all. David's parents get pulled over for speeding by a cop who looks and sounds remarkably like one of the cops who died at the beginning of the movie. David's father explains that David may be out of his medication, and he could be dangerous. The cop buys the story, and provides them with a police escort. Meanwhile, someone tosses a lightbulb into the hot tub, electrocuting Frannie. You have to feel bad for her. She had two lines in the entire movie. She was basically just there to rack up the body count. Come to think of it, you could say that about most of the characters. Now it's down to just David, Joni, and D.B. The power mysteriously goes out, which has no visible effect, because no one had bothered to turn any of the lights on in the house. Finally, D.B. notices that something might just be awry when he finds Russell's bloody corpse. Much to D.B.'s surprise, Russell did not crush his own windpipe as a joke - there was foul play. He grabs a flashlight and goes down into the basement. There, he finds Runner and Lisa's bodies. As it dawns on him that there is a murderer in the house, he gets stabbed in the stomach with a rather large knife. 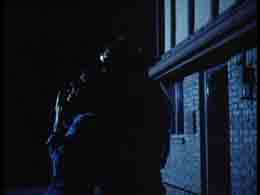 If this is an unedited picture of the climactic fight, it's possible that your movie is too damn dark!

Joni decides to take a stroll along the top floor balcony in total darkness. Little does she know, Snake is right behind her. Luckily, David comes along at the right time, and he and Snake engage in the most confusing fight of all time. I know that Snake loses his knife and that he eventually gains the advantage over David, but I have no idea how either of those things happen. This movie is too goddamn dark. Whatever the case may be, Snake ends up pinning David, then he pulls out another knife. Just then, D.B. crawls onto the balcony, with a knife still embedded in his stomach. He grabs Snake's first knife and tosses it to David, who sticks it in Snake's kidney. Snake and D.B. both die, leaving just David and Joni. David limps downstairs and finds Joni already fast asleep on the floor in front of the fireplace, even though she was on the balcony all of twenty seconds earlier.

David collapses beside her, dropping the knife he was carrying. He accuses Joni of killing D.B., even though he has no evidence of any sort that would make him say that. It doesn't matter, though, because she confesses to it. She also says that she killed her parents, the ugly hicks at the very beginning, and all of David's friends, so that she and David could be together. Of course, she takes a good eight minutes to say that because she insists on using incredibly cliched "you shouldn't a-done it" psychobabble to prove she's crazy. She must say "you shouldn't a-done it" and "David" two dozen times each. It is an interminable monologue that fails to give any real justification for any of the murders, most of all that of her parents. It also fails to account for the murders that we know were committed by the convicts. But hey, the movie hasn't made any sense up to now, why start? In fact, let's get even crazier! After explaining ad nauseam that she wants to be with David, Joni picks up the knife and tries to kill him. Just then, a police officer bursts into the house and shoots Joni. 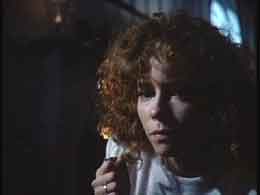 The final scene opens with David's father and mother sitting at the end of a hospital bed, reassuring the off-camera patient that everything will be okay. An orderly asks the parents o step out into the hall, where a police officer tells them that there's no doubt that David killed Snake Monroe. There is no mention of the ten other deaths or of Joni or Snake's killing sprees. David, however, is a murderer. It doesn't much matter, though, because he's dead. That's right, the police officer shot Joni in the side, but somehow she survived and David died. The camera turns back to the bed, where we see Joni sleeping. Her hands are bandaged, obviously a result of getting shot in the ribs, but otherwise she's fine. "Chopsticks" begins to play as she opens her eyes and smiles. And that, I'm so very sorry to say, is the end. Or is it? No, it's not. The credits begin to roll, but in between every screenful of credits is a scene from the movie. Every single murder is replayed, as well as a few other key points, including Joni's confession. Basically, you could just watch the credits and not miss a single thing other than the porn. I don't think I've said it yet, so I'll do so now: I hate this movie.

There is so much wrong with "Night Screams" that a plot synopsis simply cannot address. It would have taken me pages to accurately recount every time a character appears in a location where he or she could not conceivably be according the laws of physics. When it was not violating the space-time continuum, this movie featured shaky camera work. Even that was often easy to overlook, because the scenes were so dark that the cinematography didn't make any difference. As annoying as this movie is to watch, it is equally annoying to listen to. The microphones flickered on and off at random, which often cut off the ends of important lines. The soundtrack features three songs, one of which is fucking "Chopsticks." All three are played again during the credits. I feel bad for the actors in this crapfest. Most of them seem like they tried their best. Their best may have been wooden and severely lacking in inflection and enunciation, but hey, they were trying. They were just too inexperienced to realize that they were being directed by a lunatic. The screenplay by Dillis L. Hart II and Mitch Brian was piss poor, but it could have been salvaged by a few dozen more revisions. I'm not saying it could have been a good movie. But it probably could have remained in forgettable horror flick obscurity. Instead, Allen Plone snatched a lousy script and dragged it down as far as it could go until it reached the level of badness that brought it to my desk. I now have a personal grudge against Allen Plone. If only, if only, if only I knew voodoo.