David and his friends head to a club, where they dance, drink illegally, and engage in the most pointless arguments mankind has ever known. Everything that a guy says, his girlfriend gets upset about. Everything that a girl says, another guy makes a disgustingly lewd comment about. This scene is a massive pothole in the road that is the English language. It serves three functions. 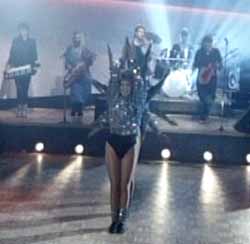 1) To further exacerbate the point that David isn't happy about his scholarship for some reason.

2) To give David an opportunity to go to a bathroom, look in the mirror, and pop some pills while replaying poorly edited clips of earlier conversations in his head.

3) To show off the Sweetheart Dancers, who are touted in the opening credits and by an emcee in the scene as being nationally recognized, but whose dancing consists mainly of running back and forth.

Back at the house, Snake rambles off some extemporaneous poetry about killing people and breaking into houses. Snake is truly the John Donne of mass murdering psychopaths. The convicts hide somewhere (it could be the basement, it could be upstairs - there's no way to be certain) as David, Joni, D.B., and his girlfriend Lisa show up to get the house ready for a party. That's right! The house that the convicts broke into is none other than David's house! I tell you, the plot twists sneak up on you like the St. Patrick's Day parade in "Night Screams," boy howdy. David goes into the basement (I guess the convicts aren't down there) and turns on the power. Yep, that's right, whenever David's family leaves the house, they don't just turn off the lights, they turn off all the power. That has got to be a bitch for their clocks. Not to mention their refrigerator. The other couples start to show up. There are a lot of names to remember here, and a lot of the characters are pretty similar, so I've taken the liberty of providing a handy chart of who is dating whom and their basic archetypes.

Within seconds of arriving at the party, Chris tries to seduce David, but fails miserably. Then Brenda tries to seduce David, but fails miserably. Mason sees David with Brenda and tries to threaten him, but fails miserably. Mason tells Brenda to meet him upstairs, and he goes to the master bedroom. He doesn't bother to turn on the lights, and instead sits in a chair by the bed. Someone stabs him through the chest with a fireplace poker. That's what he gets for sitting in a chair, of all places. Moments later, a mysterious hand cuts the telephone line to the house. There is a brief interlude with David's parents at a restaurant. David's mother worries that David has run out of pills in the last four hours. His father tells her that David is a grown boy and can take care of himself. At the house, Joni, Chris, and Lisa fix their makeup in the bathroom. Lisa asks Joni where she lived before she moved to Oklahoma, to which Joni only replies, "a really nice place." It would be a very mysterious line, except that the only circumstance in which someone would actually say "a really nice place" is if they were in a freaking mental institution. More on that later.

Meanwhile, Brenda can't find Mason anywhere, so she decides to leave the party without telling anyone. As she drives off, one of the convicts - it looks like Runner, but it's too dark to be sure - tries to strangle her from the back seat. Brenda escapes the car and runs into a big field, where she cleverly hides under another car, which just happens to be jacked up in the middle of nowhere. In fact, Brenda had to run through a forest to get to the field from the road. I guess she had to die somehow, and Allen Plone couldn't do something as unrealistic as having her be strangled, or having her crashing the car, or possibly giving the convict a weapon of some sort. So, whichever convict it is simply kicks the jack, dropping the car on Brenda. 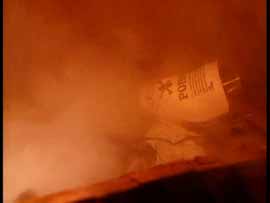 Let this be a lesson to you - always mark your bottles of poison clearly, so that - oh, wait!

Now Brenda and Mason are both missing, but no one seems to notice or care. Doug and Chris watch a porno while the others hang around the pool table, drinking. Russell makes a lame joke about shock therapy around Joni, and she gets upset and storms off. It would be very mysterious of her, except that the only circumstance in which someone would storm off after a shock therapy joke is if they got shock therapy in a freaking mental institution. Things are starting to get suspicious... In the basement, or attic, or wherever the convicts are hiding (Runner is back now, don't ask how), Snake washes his face while waxing philosophical about the human condition, killing people, and breaking into places for about twenty minutes. Then he helps Runner into a sport coat. Clearly, these two criminal masterminds are unstoppable.

Meanwhile, Chris and Doug decide to abandon their porn and head for the sauna. While they prepare to work their respective mojos, Joni finds David in his massive bedroom. She whines about not fitting in with the other people at the party, he whines about his dad pressuring him to play football in college, they both whine about wanting to be with each other. So, we're supposed to want these two to survive because....? Chris and Doug go at it like rabbits who are also in a sauna. Apparently, Allen Plone couldn't get his actors to do their own nude scenes, so he just spliced in scenes from bad pornos. Most of it centers around massive and obviously fake breasts heaving in a shower. That Plone, never skimps when quality's on the line. After Chris and Doug are done dry humping one another, Chris says she's going out to the pool. Doug tells her he'll "be out in a few minutes." Use your imagination. No, wait, don't. You don't want that image in your head. Chris goes out to the pool in complete darkness. In the meantime, someone tosses a bottle of poison onto the coals in the sauna. Seriously. It's a bottle of poison. You know, the kind you have just laying around the house. Well, it sure is a good thing that Chris wasn't in the sauna. She swims around in the pool for a bit, then as she's getting out of the water, someone puts an axe in her head. That is to say, someone puts an axe in a coconut with a wig on it. 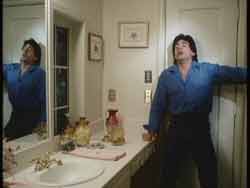 The pills may be able to contain David's murderous rage, but not the song within his heart.

Inside, D.B. and Lisa play a round of pool while Russell tries to distract them by rapidly blowing on a bottle and rapidly blowing on a cheap pipe. The laughter never stops when Russell's around. You just don't see "rapidly blowing on a pipe" humor anymore. Thank God. In the meantime, David goes into the bathroom, looks in the mirror, and pops some more pills while replaying clips from previous conversations. D.B., Lisa, and Russell go to the basement to get their seventy-second bottle of wine of the evening. The two convicts hide as they come downstairs. Now we have confirmation - the convicts have been hiding in the basement the whole time. How stupid of me not to see it before. I guess I was just thrown off by the numerous shots that show the convicts hiding in other settings. Chuck and Frannie, who haven't done anything of note so far in the movie, make out in the jacuzzi outside. The rest of the gang, David included, start up a game of darts. On his first throw, Russell misses the dartboard and marks the wall. David nearly rips his head off his shoulders. I can't express how much it pains me to have to use the word "nearly." Chuck announces that he's hungry, so he goes back into the house and throws some raw hamburger on the stovetop grill. Someone pushes his head against the stove from behind for roughly four-elevenths of a second, which melts off half of his face. In that same amount of time, the hamburger is not cooked at all. To finish the job, the mysterious assailant (we only see a glove) stabs Chuck through the neck with a barbeque fork. Take that, yuppie. Still at the restaurant, David's parents try to call the house, but there is no answer, since the phones were cut. They decide to drive home immediately.

Being the sensitive, romantic guy that he is, D.B. sends Lisa into the basement to bring him more booze. As she browses through the wine rack, Snake smashes the lightbulb above her. No flicking lightswitches for this bad boy! He beats Lisa to the ground and strangles her, chanting "cut her throat, spill her blood, do her in." Well, it's not exactly the Yeats he was spouting earlier, but it has a good rhythm. In a turn straight out of Of Mice and Men, Runner tells Snake he "shouldn't ought to kill her." Snake advances on Runner. Frightened, Runner takes a deep breath and starts to scream. Snake throws a thin, clear plastic bag over his head. Suddenly, Runner's screaming is silenced, because sound can't travel through flimsy plastic bags. Is there anything we can't learn from this movie?