The Follies of Al Pacino 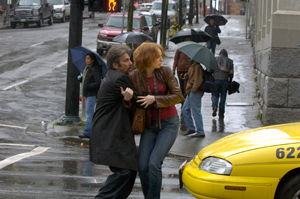 'Look out! That cab driver is wearing a leather jacket!' Gramm encounters enigmatic student Lauren (Leelee Sobieski) in a parking garage stairwell, where she claims to have been attacked. She rambles "I bit his hand, it's bleeding, his hand is bloody, can you get him" without punctuation or panic, as if she were begrudgingly speed-reading a children's book called Why I Bit The Bad Man to her kid brother. She claims her assaulter wore a leather jacket, and the first two people Gramm finds are wearing that exact item of clothing, but neither of them has teethmarks gouged into their palms.

A few minutes later, though, a leather-jacketed biker attempts to flatten Gramm and his student assistant Kim (Alicia Witt). Though the helmet was opaquely black, and leather jackets are obviously extremely common in Seattle, Kim immediately identifies the death racer as her awesomely named abusive boyfriend Guy LaForge. (88 Minutes put a lot of effort into its names, as also evidenced by a twerpy investigator aptly christened Jeremy Guber who says things like "this is such a beautiful conference room.") Later, a fire truck no doubt navigated by some leather-clad maniac barrels to the scene of a crime, scattering pedestrians in its wake. Due to its reckless speed, it manages to arrive before the fire, which occurs minutes later when Gramm's car explodes.

When Gramm grabs a weapon to protect himself, Kim eyes the gun and says "that'll blow a hole through any theory." Pacino looks completely confused and ashamed in the reaction shot, and Kim's blurted elaboration about how she knows firearms from growing up around cops doesn't distract from the feeling that this wasn't Gramm's disbelief but instead Pacino's instinctive response to being asked to deal with this kind of dialogue.

This still photo from Al Pacino's unscripted on-set meltdown appears on the DVD as an extra.A series of copycat murders leads to support for Forster's claims of innocence, and the audience might start to ask questions, too, except Avnet already ruined all possible tension by having him say "tick, tock" in the courtroom. However, haphazard coincidences frame Gramm as a suspect, causing this movie's Scowling Cop Boss to confront him. "Do you have any idea how absurd that sounds?", Cop Boss says in a line that not only could apply to anything said or done in the movie, but also should have been spoken by an editor long before this film finished production. To clarify, the Boss was specifically referring to Gramm's claim that someone had covertly deposited his sperm into various vaginal cavities, all belonging to his deceased former students.

Avnet attempts to cast doubt upon several characters, but this gambit fails because they're all clearly being coerced into fake confessions. He bizarrely believes audiences will swallow any confession as fact, regardless of how transparently they're staged. Gramm discovers the identity of Forster's acolyte while flipping through papers behind the wheel of a car stopped at a green light, much to the frustration of any death-threat recipients stuck behind him who'd like to get more bang out of their remaining hours. When Avnet reveals the arbitrarily chosen accomplice's identity, he flashes back on all the Killer's previous scenes, none of which has much have any particular revelatory value. Gramm and Killer engage in a monotone, monosyllabic exchange (Killer: "Is that a gun?" He: "I have a gun.") Obviously, they guzzled the same tranquilizer during the shoot.

Soon after Killer dies, Gramm answers her phone. Forster taunts him, without even questioning why he'd be serving as Killer's answering service. Gramm zings him by regurgitating the "tick tock" catch phrase, then he throws the phone, which traces a slow-motion arc through the air before breaking upon impact. Pacino should commit this scene to muscle memory, so he can replicate it the next time Avnet calls him to pitch a project.