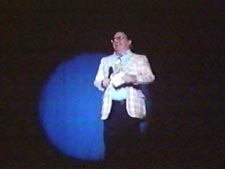 While Adam watches men put lipstick on one another in the most homoerotic fashion possible (for applying lipstick that's really saying something), a magician appears in the doorway. He's pale, dressed in a black tux, and serves no real function within the movie. The magician points his magic wand at the makeup table, causing a bowl of chips and some cans of beer to mystically... still be there. I'm pretty sure that Ota Richter wants us to think that stuff just appeared, but thanks to crappy editing, there's really no way of knowing if they weren't there to begin with. Way to go, Ota. One of the few cases where you could have gotten away with a jerky jump edit, and you fucked it up. Wow. A man with a tic tac toe game sewn onto the back of his jacket is caught peeping into the girl's changing room by a campus security guard. Then the guard steals a peek for himself until the magician catches him in the act. Men want to see naked girls! Ha ha! It doesn't get much funnier than that! At least, not in this movie. The magician just lets himself into the changing room. The girls are upset by his presence, since he makes them all look masculine by comparison, and they kick him out, but not before he blows off a girl's robe by pointing his magic wand at her. I once did the same thing by pointing my magic wand at a girl, but I promised the judge I wouldn't talk about any of the details of that little incident. 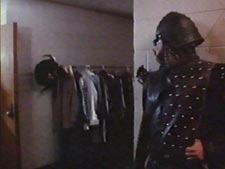 This is seriously one of the high points of the movie. Run.

A fat, balding, ass-ugly emcee opens the show by introducing Simco the magician. Our old magician friend takes the stage, picks up a white flower, and drapes a cloth over it. Once again, if they couldn't figure out the magic behind this doozy of a trick, a jump edit could have sufficed. Given the generally awful film quality thus far, no one would begrudge Richter if he had a few sloppy cuts. But no, instead the camera pans away from the hand with the flower for a while, then pans back. When Simco pulls off the cloth - get ready to be amazed - the flower is red! Magic!

Barbara calls Adam to come watch the rest of Simco's act, which is actually kind of refreshing. If Richter is going to waste our time, it's nice to see him waste the characters' time, too. Once Simco is finally done, the emcee introduces a shitty little play about medieval lovers. While the play goes on, we are treated to a few pointless cutscenes in the women's dressing room, including a bit where one girl discovers a costume piece that is supposed to be a fig leaf and asks if she can smoke it. An actor doesn't show up for the play, so the stage manager assigns Adam to play the role of the knight. He assures Adam that it's not a speaking role. Actually, it's not even an acting role. All he has to do is walk onstage in plastic armor, then walk off again. He gets rave reviews. Offstage, Simco gives Adam a snide look, then taps his magic wand, which causes the lights in the auditorium to go out. God, that magician is a dickweed.

We see the enigmatic man in a suit put a second piece in the puzzle. You know, if it's an eight piece puzzle, does he really need to start with the corners? Oh, whatever. Back at the talent show, Adam tries to chase down a girl and kill her with his sword. She doesn't notice. While an Italian exchange student makes a mockery of her country by performing some half-assed dance, Adam goes into the women's changing room, still in armor. There, he shows off the evil within his dark soul by giving a girl a massage. That bastard! The man in a suit puts the third piece in the puzzle. In response, Adam, who is now back in regular clothes, goes to the side of the stage. Now some vapid girl is acting out the story of Eve in the Garden of Eden. Get it? Adam and Eve? Ahahahaha... I hate my life. Adam recites the magic words and a huge snake slithers out of the cardboard tree on stage and wraps around the girl. Mind you, it doesn't bite her or squeeze her, it just sort of moves. It looks sedated to high hell. Hooray for Adam's sinister warlock powers. 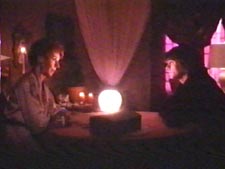 Stare at this image for the next eight minutes. Done? Congratulations, you just watched the entire scene!

At the costume shop, Barbara and Adam lament over the talent show. Barbara claims she saw the girl have a heart attack onstage, but Adam maintains that there was a huge snake, which there was. And yet, Barbara thinks Adam is the one who should seek psychiatric help. A fat couple named Mr. and Mrs. Bull come into the store for the singular purpose of creating an immensely stupid gag when Adam calls psychiatry "bull." Let me tell you, my sides are splitting, and I plan to sue Ota Richter for the hours of surgery it will take to repair them. Well, Adam ends up seeking professional help after all in the form of a fortune teller. Okay, yes, I realize that in order to advance what passes for the plot in this movie Adam has to think he's going crazy. But Jesus Christ, all he did was see a snake that was actually there! Barbara saw a scalpel turn into a dagger and no one sent her to any damn fortune teller. I hate this movie. After the mysterious guy in the suit puts the fourth piece of the puzzle together, Alan pays a visit to Madame Kardos. She yammers on for about ten minutes without revealing one iota of pertinent information. Finally, Adam stabs her to death with her own pen. I can't say I blame him. If I paid twenty bucks so some shriveled crank could waste my time, I'd get a little stabhappy, too. A voice from behind Adam tells him to put his hands up and turn around slowly. Adam complies, thinking he's been caught, but it turns out it's just the TV. Why does a fortune teller have a TV on during business and why didn't we hear it before if the volume is up so high? Because it is only there for the sake of the gag, that's why. Do you see what I have to put up with? 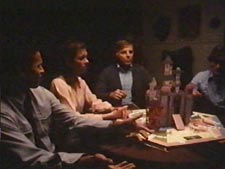 We cut to the costume shop basement for some more gaming. Yes sir, nothing says "excitement" like watching a bunch of nerds argue over where their elven ranger is in the enchanted castle of wonder. Chuck gives the party a quest to kill a powerful sorceress who dresses only in white. Later, Adam stands outside the hospital for some unknown reason when he sees a nurse walk by. He remember's Chuck's order to kill the woman in white and follows her into the hospital. A radio announcer reports that Madame Kardos and the supposedly eighteen year old girl from the junior college both died of heart attacks. Okay, if you want to say Adam hallucinated the snake and the girl really did have a heart attack, fine, but he goddamn stabbed the fortune teller to death! With a pen! Trottelville must have the most incompetent medical practitioners in the world if no one ever noticed the bloody stab wounds on the fortune teller's chest. God, this movie sucks so much. The radio also reports that homicide is suspected in both cases. OH MY GOD THAT DOESN'T MAKE SENSE! HOW CAN THEY CALL HEART ATTACKS HOMICIDE? AAARGH! 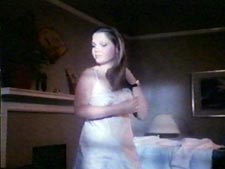 A different nurse runs into Adam. Now he's somehow in doctor's clothes. He kills her by stabbing her in the side of the head with a huge syringe. The weird guy with the tic tac toe jacket walks by needlessly. Adam gets out of there just before Barbara and a bunch of doctors congregate around the body. I swear to God, Barbara holds the dead nurse's bloody head in her hands and declares it a heart attack. There aren't enough obscenities in the English vocabulary for what I want to say, so I'm going to have to modify one: superfuck you, Ota Richter. Superfuck you and your superfucking movie. Alright, we see the guy in a suit put another piece in the puzzle, then zip right back to the hospital. The original nurse that Adam followed in starts coming on to him. He treats her like shit, but according to Ota Richter women love that sort of thing. They go to her apartment, where the nurse cleans Adam's clothes for him. Yes, you read that right. They just met, so they go back to her place and she does his freaking laundry. She tries to have sex with him, too, but Adam won't have any of that. Instead, he puts his pants back on, grabs the conveniently placed scythe that just happens to be hanging on the wall of her apartment, and chases her with it. Instantly, they're outside and far from the apartment. She runs to a church graveyard where a funeral is in progress. Adam lobs the scythe at her, but misses. Luckily for him, she trips and decides to stay in one place for a few minutes. Adam uses his magic words to conjure up some fake-looking armor and medieval weaponry. He finally kills her with his sword. Take that, skank. 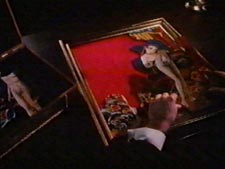 At the costume shop basement, Adam freaks everyone out by saying the quest is complete and handing Chuck a swatch of white cloth. Even though he refuses to break character and insists that he killed a woman in white, Barbara has no qualms about assigning him a customer in the store after the game is over. Adam helps a snooty woman find a Fourteenth century (read: distinctly not Fourteenth century) dress for a costume party that night. He goes off camera for a moment - just long enough for the man in the suit to put in one more puzzle piece - then returns in a giant bunny suit. He stabs the woman with what looks like a butter knife. Lord knows, you can't stab people without a bunny suit. It's just cruel. We go right back to gaming, where Chuck tells them that their new quest is to kill a bunch of devil worshippers who can be found at the "Villa Evel," which just happens to be the name of the place where the snooty woman's costume party is being held, and that they can get in with the password "skullduggery," which just happens to be the actual password for the Villa Evel. No one comments on the fact that the game supposedly broke up for the night, and the costume party was supposed to be that night, but they started gaming again. Even the plot holes in this piece of filth have plot holes.