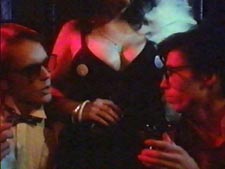 This is the only time these men will ever see breasts again.

Adam shows up at he costume party with the murdered woman's invitation and the coincidentally correct password. Chuck's order to kill the devil worshippers echoes in his head as he meets a masked man named - I swear - Dr. Evel. Yes, that is the right spelling, but it's pronounced just like you're thinking. The costumed partiers dance to, of all things, the "Skullduggery" theme song. Now that's what I call a party! Adam changes into a Romeo costume just in time to be introduced to a young woman by Dr. Evel. The woman offers him an apple, which I have to assume is some sort of bizarre Eighties courtship ritual. Adam takes her into the kitchen and kills her with a butcher knife. Just to drill home the quasi-semi-sorta-irony of killing someone with a butcher knife in a kitchen, Adam puts on a chef's hat. Hooray. Dr. Evel calls everyone into a different room to watch Karen the ballerina perform. After several useless minutes of mediocre ballet, Karen finally stops. A few partygoers stumble into the kitchen and find roller skates cooking in the over. I'm sure that's supposed to have something to do with the woman Adam killed, but I really don't remember her wearing roller skates. In fact, I'm pretty damn sure she was walking. Maybe the skates are symbolism for this being a terrible movie.

Even though he just sent Adam away with a good-looking woman all of five minutes ago, Dr. Evel introduces him to Karen and sends them on their way. Now Adam is in an entirely new costume, but no one gives a rat's ass. Karen offers Adam a bowl of blood to drink. I guess he wanted another apple, though, because rather than drink the blood, he opens up a steam vent overhead and boils the skin off Karen's head in about two seconds. Just like in real life! Adam returns to the party, this time in a knight costume. A hula dancer approaches him and leads him away. She is attacked by two male partygoers, so Adam gores all three of them on his sword and leaves them there. Alright, you might think that you've seen the worst "Skullduggery" has to offer, but I'm telling you here and now that it's all downhill from here. Take a few deep breaths before trying to absorb the last portion of the movie. 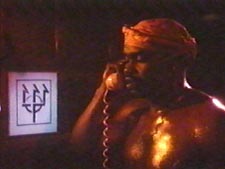 "Hello, police? I'm just calling to tell you that my bodysuit matches the phone and it... feels... FABULOUS!"

The phone rings and a large-breasted partygoer answers it. She immediately shouts out that "the master" is calling everyone together. Meanwhile, Adam, who is now dressed as Death, holds a knife to a woman's throat and steals away with her. He's getting less and less subtle about this whole "kill all the extras" kick he's on. The woman manages to escape, leading Adam on a frantic, by which I mean hideously boring and poorly shot chase throughout the house. She finally hides behind a door, so he just stabs through it, then runs away like the little sissy mass murderer he is. When the other partygoers arrive, they find that the woman has been stabbed in the head, but she's okay. She's just in shock. The snooty woman at the costume shop died from a butter knife to the flab, but this one walks away from a dagger to the head. Then that goddamn tic tac toe guy walks by. The party continues as if no one had just been stabbed and no one was dead. Adam, now in a warlock costume, calls everyone into the performance room for a magic show. He calls two female partygoers out of the crowd. The three of them walk through a doorway surrounded by fluorescent lights. A few minutes later, a purple fishtank fades into view in the doorway. Dr. Evel, recognizing fish as the sign of ultimate evil, has his gay black manservant call the police. The stabbings were fine, but nobody brings fish into Villa Evel.

The man in the suit puts the final piece in the puzzle, which causes absolutely nothing to happen. Gee, and after all that exhilarating build up. I sure do feel cheated. The police arrive at Villa Evel and try to solve the case by accusing anyone they can get their hands on and ripping off lines from Sherlock Holmes. Between the doctors who blame massive head wounds on a heart attack and a police force that catches criminals by picking people at random, Trottelville is the easiest place to get away with murder in America. Dr. Evel corrects the police on their idiocy and tells them that Adam is the murderer. Foregoing unnecessary technicalities like proof and evidence, the cops rush to the costume shop. 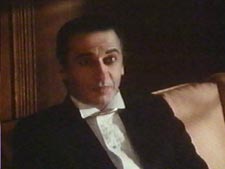 He doesn't look so Evel to me.

The cops arrive at the shop in full force with guns drawn. When Adam doesn't respond to their one attempt to call him out, the officers spread out and search the rows of costumes to find him. Now dressed in some sort of demon/goat/clown costume, Adam picks off the cops one by one. At one point he actually steps out of the costume racks in plain sight of a cop with his gun trained on him. Adam takes the time to pull out a bow and arrow, set up the arrow, aim, pull back the bow, and fire before the cop can squeeze off a single shot. Needless to say, the cop dies instantly. Adam hides again, then emerges as an armor-clad knight. The remaining two cops shoot him for a good long while until he falls over. When they approach the armor, there is nothing inside but that stupid clown puppet.

Downstairs in the basement, the gamers position a suit of armor in Adam's chair. Chuck wails on about gaming one more time for Adam. They put dice in the armor's hand and move it so it rolls. The armor suddenly comes to life and kills Chuck... somehow. It reaches out as if it was going to strangle him, but never gets close enough. Chuck just sort of dies on his own. As he lays on the ground, his hand falls across his chest with his middle finger extended. Just like Jake told him to do at the beginning of the movie! Well, I'll be! What a brilliant stroke of continuity! That almost redeems the entire.... no, I'm sorry. I can't go through this charade, no matter how sarcasm-laden it is. This movie blows more than the mortal mind can fully comprehend. Oh, I almost forgot to mention that the shot of Chuck flipping the bird is the last shot in the movie. The end. Put that in your pipe and smoke it. Then ram the smoking pipe into your ear and hope it burns all memory of the crappy movie from your brain. 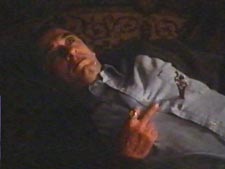 A shot like this and the academy just passed the movie right by. What a shame.

'Skullduggery" is loaded with recurring shots and bit characters that could be seen as motifs. The problem is, none of them have any meaning whatsoever. The clown puppet keeps popping up, but never amounts to anything. The man in the suit finishes the puzzle, but we never learn who he is or the significance of the puzzle. The guy in the tic tac toe jacket wanders through scenes at random intervals, but never says or does anything. There are even ones I never mentioned. Throughout the movie, Barbara complains of a rash on her ankle. That never goes anywhere. At all. And then there are the gaping plot holes. Why did the big-breasted woman call everyone to gather for the master? Who is the master? I assume it's Dr. Evel, but that never pans out at all. What happens to Adam? The suit of armor falls back at the end and there's nothing inside. Where is he? Is that the end of his killing spree? Do any of the bloody murders ever get diagnosed as anything other than heart attacks? What about all the bodies in the costume shop? Does Adam really have time to clean them up? Why are Jake and Dave there at all? They never do anything. Dave only has two lines in the entire movie and they both suck. AND WHAT THE FUCK IS WITH THAT ENDING?