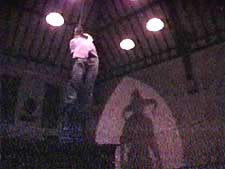 Why is this noose the most easily escapable trap in the movie? Someone dies in a bathtub, for Christ sake!We cut to Skip, who is dangling by a noose in the gym. Marty may be able to rig the school so beds electrocute people and stomach juice pours out of the bath, but he sure as hell can't tie a knot. Skip wriggles free without any real trouble. Carol and Nancy decide it would be a good idea to revisit all of the murder sites. Yep, nothing says "safety" like going to all the places where you know the killer can get you. Nancy babbles the entire time in her incomprehensible, lisping troll-speak. Amazingly enough, not only are the bodies gone, but the huge amount of blood is all cleaned up. Now, that there is a sign of a considerate killer. Sure, he'll burn your skin and fatty tissues off, but he'll clean up the mess. And since he killed the janitor, it's only proper etiquette if there's going to be school on Monday. Nancy finds Marty's old yearbook. Because only ten people went to the damn school, all of the bullies' pictures are on the same page. The dead ones have X's over them. Nancy decides that she's next, so she makes a break for it. For some reason, she is easily able to get out of the building. They spent the entire first half of the movie complaining about not being able to get in the school, then about not being able to get out, and now Late Girl and Bridge-Dweller McHideous have absolutely no problem coming and going. Unfortunately for Nancy, she falls into a mud pit outside. It wasn't even a cleverly hidden mudpit. In fact, it was sort of out of the way. She tries to climb out, but Marty pushes her back in. Somehow, this kills her. She doesn't drown, she just falls back in and dies. I have to imagine it's because of some strange troll allergy.

Carol, in the meantime, stumbles upon the janitor's mutilated body. Oh sure, clean up every drop of blood from the other murders, but do you clean up the black man's body? Not a chance. If there's one thing I can't stand, it's murderous nerds who are racist. If there are two things I can't stand, they're murderous nerds who are racist and George Dugdale. What sort of name is "Dugdale," anyway? It sounds like some sort of porn star. Anyway, Carol decides that the safest place to hide would be in one of the toilet stalls in the girls' locker room. You know, the locker room where Marty changed all the water to liquid fire. Great thinking, there, dipshit. Marty obviously planned for one of his victims to hide in the crapper, because he rigged blood to bubble up out of the toilet. Nothing particularly dangerous, just blood. Well, I suppose it could have been carrying HIV or a similarly plasma-borne virus, but that seems like something of a stretch for the audience. Nonetheless, Carol runs out of the locker room and dashes up a flight of stair into the gym, which was previously on the same floor as the locker rooms. She picks up a bat, and just then, a body falls from the ceiling. Due to the poor video quality, I honestly have no idea whose body it is, but it's enough to send Carol running back through the halls. She encounters the gigantic picture of the Marty. The holes in it are patched up nicely. Marty bursts through and Carol beats the crap out of him with the bat. She has him on the ground, barely moving, but rather than finishing him off or rendering him unconscious, she comes up with the brilliant plan of dropping the bat and running away. Marty, not being a complete nimrod, picks up the damn bat and slowly hobbles after her.

Carol runs down several flights of stairs (it's a two-story building) as fast as her legs can carry her. However, since this is a godawful horror movie, Marty manages to get ahead of her. Carol tries to hide in the gym, but Marty follows her in and trades his bat for the javelin. Carol makes a break for it and manages to get away again and runs down a few more flights of stairs. She finds a conveniently-placed hatchet on the wall. Back in those days, you could leave bladed weaponry strewn all over the walls of public high schools without any problem. Not like today. You leave even the smallest hatchet laying around in a high school these days, and you'll be reading about some kid who went on a hatcheting spree in the next day's paper. Where did our society go wrong? Oh yeah, when we allowed movies this bad to be made. With Marty hot on her heels, Carol hides around a corner and gives the first person to come close a nice, clean hatchet in the eye. Unfortunately, that person is Skip. Oh, come on, you were waiting for him to die, too. Being the brilliant tactician that she is, Carol runs back around the corner where she last saw Marty. Amazingly enough, Marty is there. She quickly throws him through a window, sending him down into the gym. Secure in the knowledge that Marty is dead, she picks up his fallen javelin and tosses it down to him. In case you didn't quite follow what just happened, let me sum it up: Carol left the gym, went down two flights of stairs, and was then somehow above the gym. I'd have an aneurysm if I wasn't a robot. 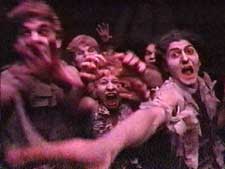 Surprise, surprise, Marty isn't dead. He picks up the javelin that Carol was thoughtful enough to return to him and goes out in search of his quarry. I can imagine Carol's thought process here: "Hmm... he killed the Connie Chung Lookalike in the girls' locker room, then he made blood bubble out of a toilet in the girls' locker room. The way I see it, the girls' locker room is due for some peace and quiet." She hides in the shower stall. To Carol's complete surprise, Marty finds her there and javelins the hell out of her. Gloating, Marty pulls off his mask, revealing his partially burnt face. It's not that bad, really, but I guess some guys are just vain. And psychotic. Marty shouts, "I showed you! April Fools! I showed you! April Fools!" for a good long time while wandering the halls. When he goes back to the reunion room, it is full of smoke and zombies. Wait, zombies? What the fuck? Zombie versions of everyone Marty killed chase him around the school. Jesus, the little dweeb can't even kill people right. What a nerd.

We cut to a hospital, where Marty lays in bed, his head completely bandaged. A nurse comes in to give him a shot. Suddenly, an alarm sounds in the hallway. A doctor rushes in to see what all the fuss is about, but when the nurse turns around, it's actually Marty in the nurse's uniform. Marty jams a needle in the doctor's eye, then takes a look at himself in the mirror. His face is absolutely fine, not a mark on it. In fact, it's even better, as now he can see without his glasses. Having your face burned off with acid does that. Marty is evidently upset about the loss of his glasses, though, as he proceeds to rip off the right half of his own face. I have to say, I have very mixed feelings about telling you that's where the movie ends.

Aside from the fact that the ending makes absolutely no sense no matter how you look at it, "Slaughter High" is a cinematic failure on a surprising number of levels. George Dugdale wrote the damn script, but he apparently didn't pay any attention to it. The transitions between locations make no sense. From the number of staircases that the characters climb, the school would have to be a freaking skyscraper. There is no sense of continuity whatsoever. Rooms are on one floor in one scene and three floors higher in the next. The most development any character gets is "she's an actress." They are all two-dimensional at best. I seriously think Dugdale just came to the set, said "action," and left for the day, since portions of the movie that last several minutes are shot in complete and utter darkness. On the other hand, "Slaughter High" does teach a worthwhile lesson to impressionable young kids: don't smoke pot or you'll get your face burnt off, go insane, get killed by zombies, and then rip off your face, which had already been burnt off. Words to live by.