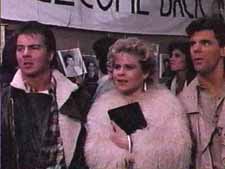 Joe/Frank, Stella, and some guy relive their high school days by staring vacantly at nothing.Ah, the next page. Stella, who in the seemingly few years since she graduated high school has managed to turn into an elderly Brooklyn grandmother, reveals that the date is March 31st, and it's almost midnight. That means it will be April Fool's Day soon. See, April Fool's Day is the first day of April, and March 31st is the last day of March. And midnight is the point at which one day ends and the next begins. Get it? Do you understand? Can I pound this in any further? The answer is no, and neither could this movie. Everyone with a name accuses Skip of playing a practical joke on them, but he swears it he had nothing to do with it. The gang explores their old school, popping in on such rooms as the gym, a classroom, the girls' locker room, and a random bedroom. Just like my high school. At last, they find a room with a "Welcome Back" banner, a slew of beers, their old lockers, and a rickety bed, thus rendering the aforementioned bedroom totally useless. Skip admits that this was all his devising. Marty's locker is also there, which prompts Skip to tell his friends that plastic surgery was never able to help Marty, and he went completely insane. Then he says that was bullshit and Marty is really doing fine and working for IBM. The joke's on him, of course. In fifteen years, IBM will collapse under the weight of the massive computer industry giants. He'll have to become an outside consultant Ha ha ha! Movie's over! 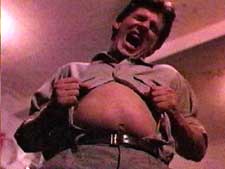 "You wouldn't like me when I'm angry.... RAAARRRR! CHUBBY HULK SMASH!"

Well, damn. I hoped that if I wrote it, it would be true, but here I am, still typing away, so there must be more movie to go. The whole crew treats themselves to some more beer while passing around joints and cocaine. Again, none of this affects their behavior in any way. Nancy and Carol excuse themselves to go to the bathroom, at which point it becomes apparent that the only bathroom in the entire building is in the girls' locker room. When they get there, Skip and Frank, or possibly Skip and Joey pop out of the shower, despite it being physically impossibly for them to have gotten there first.

The four of them head back to the party, but encounter the old school janitor along the way. The janitor is quite possibly the most horrible black stereotype I've ever seen. He's illiterate, easily bribed with beer, and completely subservient to the white crackheads who broke into his school. If he had any more dialogue, I'm positive he would have called Skip "master." The janitor meanders off and is quickly killed by a guy in a Doddsville high jacket and the old jester mask. Back at the party, the Quiet Guy chugs an entire beer, but he somehow fails to realize while drinking that the beer tastes suspiciously like anything that's not beer. Specifically, I think it's drain cleaner. His guts, which are apparently made out of macaroni, pop out like... well, like macaroni guts, actually. The Connie Chung Lookalike is splattered with blood, so she runs to the locker room to clean herself off. The rest of them run like hell, but find the doors still locked. Nancy tries to escape through a window, but she is knocked out by an electrified mesh. Thankfully, that shuts her up for a good half hour. The Redheaded Guy is too savvy to be stopped by a mere massive electrical charge, though. He kicks open the mesh and escapes through the window. He tries to make a break for it in Carol's car, but as soon as he gets it started, the killer, wearing a Doddsville High letter jacket and the jester mask, leaps onto the windshield. Somehow, the killer simultaneously manages to stab the Redheaded guy from behind. That, my friends, is talent. It is also fucking impossible.

Meanwhile, the Connie Chung Lookalike takes a bath in the girls' locker room. The blood only splattered on her face, but because this is a terrible horror movie, she spends the entire bath rubbing her breasts. Suddenly, the water changes to vomit, but Connie can't manage to turn off the faucet, so her face melts off in a laughably bad claymation scene. Okay, now all the minority characters are dead, time for the movie to really get going, right Dugdale? Roused by the Connie Chung Lookalike's death screams, the remaining bullies rush to the girls' locker room and find nothing but a skeleton. Apparently Asian people dissolve faster in acid than the rest of us. Stella declares that Marty is back for revenge. Geez, you can't slip anything past that Stella. No sir. 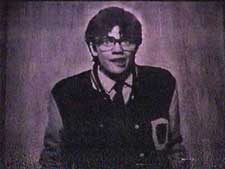 Honestly, if I saw this in the halls of my old high school, it would scare the crap out of me, too.

The Late Girl, who's character can basically be defined as, "she's late," arrives. Skip tries to warn her to turn around and leave, but she doesn't hear him. Even though all the doors to the school are locked on the inside and outside, the Late Girl has no problem entering the building in a timely fashion. She wanders down the same hallway eight or nine hundred times before she comes across a life-sized picture of Marty blocking the entire hall. You know, we had a life-sized picture of me in my high school. All the kids used to - oh wait, no we didn't, because it makes no sense. Two hands burst through the picture. I think we're supposed to assume that Marty strangled the Late Girl, because no one ever sees her again. It's okay, though, as none of the other characters seem to care in the least. Frankly, neither do I. Elsewhere, Joey remembers the ol' Doddsville High tractor. He suggests that he can fix it and they can use it to bust out of the school and ride on to freedom. As soon as he leaves, Stella, who is apparently married to Joey, starts hitting on Frank. It's not considered cheating, though, since Joey and Frank are the same goddamn person. She tells Frank that he's the real father of her baby. Meanwhile, Joey is working underneath the tractor. Marty sneaks into the garage, kicks the jack out from under the tractor, then slits both of Joey's wrists so he can't hold the tractor up. Then he turns the tractor on. Needless to say, it's a pretty shitty night for Joey. Fortunately, his spirit (and exact appearance and demeanor) will live on in Frank.

Despondent over the death of their friends, Frank and Stella have remarkably unerotic sex on the bed in the reunion room. Christ, it's like having sex with your grandma. Marty catches them and electrifies the bed, killing them both. Actually, I don't think Frank would have died if he didn't have his penis snugly inside his best friend and doppelganger's wife. Nancy, Skip, and Carol, who were previously sitting in the school lobby, are now in exactly the same positions, but inside a classroom. Movie friggin' magic. They decide to go corpse hunting and find Joey, Frank, and Stella's bodies. Skip grabs a javelin out of the gym, which is now miraculously on the same floor as the reunion room, and announces that they only have to stay alive until noon. He insists that April Fool's Day ends at noon, so Marty can't touch them after that, even though Skip and his friends tortured and mutilated Marty in the middle of the afternoon on April Fool's Day at the beginning of the movie. As Herbert Hoover once said, fuck you, George Dugdale. Skip, Nancy, and Carol try to stay awake, so of course the immediately fall asleep. Later, Skip is woken up by a noise in the hall. He goes to investigate and gets captured by Marty. Carol and Nancy wake up shortly after. Like all trolls, Nancy is grumpy when she wakes up. Sadly, there are no goats available for her to eat, so she spazzes out. Carol tries to calm her by telling her it's eleven and they only have to last another hour. "Marty's stuck to the rules so far," she says. I feel that this raises one important question: WHAT FUCKING RULES? HE KILLED YOUR FRIEND WITH ACID! ARGH, THIS MOVIE MAKES NO SENSE, AND IT ONLY GETS WORSE!