This came out on video not too long ago. I have to say even though I only watched the Jackass TV show a couple times I really enjoyed the first Jackass movie. There's just something about dudes smashing their balls and then puking on each other that I find really compelling. 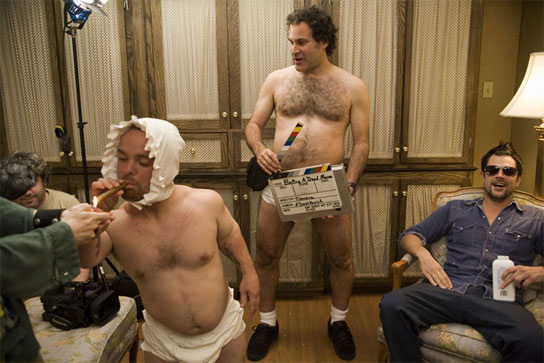 Those of you who know about Jackass probably know that there usually isn't much of a plot to these things. These guys just sort of sit around and ask the questions we're all asking like, "How much would it hurt to taser my tongue?" and "Hey, can I put a leech on my eyeball?". Then they go ahead and answer those questions. I think it's a good message about the necessity for inquisitiveness in people and how you can ride a fire hose into cactuses without many consequences.

My favorite stunts in this movie are any time some guy is about to puke and he's like heaving and then the guy from Viva Bam comes up and pukes to make the other guy puke. That guy is a genius. I also like when they poop on a dollhouse and when they funnel a beer into Steve-O's butt and he craps it out and then drinks it and pukes. Totally hilarious.

The one scene I just could not watch was when they drank the horse semen. I thought that was too gross and I have to rate this movie down for crossing the line with that one. Another big minus is that there are no babes in the movie. There are a couple in there but they don't even really count. 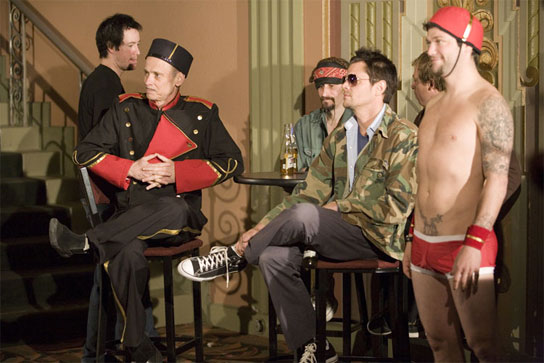 In the end I think this is one of the most influential movies I have seen in a long time. Whether you love it or hate it, there is no denying that Jackass is this generation's Star Wars. It has already inspired dozens of imitators just like Star Wars and I have a feeling in another ten years it will be getting played non-stop on TV around Christmas time.

Oh, yeah, one other thing I had a problem with is that the movie seemed pretty gay. Now, I don't want people to think I have a problem with gay people, because I'm sure they are totally awesome guys, I'm just afraid of them. I had no idea this movie would have so much gay stuff just from the previews. Maybe it needs some sort of gay warning sticker on DVDs or something so people who are afraid of gays don't have to see them.

No offense to gays AT ALL! It could swing both ways and you could see the sticker and say, "Alright, a gay movie and I am gay, this is perfect!"