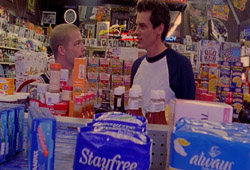 If you look to the foreground you'll see why this shot is a perfect summary of the entire movie.After Steve tracks down Duff and company and does several different drugs, including crack (which he justifies by saying “hey, I shouldn’t have smoked crack, but when in Rome...”), he goes on a joyride. They stop off to show Steve Duff’s stash of stolen items, which includes a number of highly valuable items like 90’s-era CRT monitors, an old projection TV, and a skateboard. Duff gives Steve a huge necklace, which Steve rolls around in his nasty old lady hands before accepting.

You may have noticed that by this point in the movie (over an hour in) nothing vaguely resembling a plot has appeared in “The Hillz”. This is because, as with most movies we review here, there isn’t one. Besides Paris Hilton’s lumpy, lopsided, wet paper bag of a face, there is not one thing that ties together the random stream of images and words in this movie. If anything, it’s like the movie is two separate 45 minute beings, neither of which is remotely entertaining: In the first, we watch a bunch of high schoolers ask other people to buy them alcohol, in the second, we watch those same high schoolers run around and shoot people. It’s kind of like “Kids” if “Kids” was worshiped by a bunch of closeted frat boys instead of condescending movie nerds who got fired from Blockbuster for spitting in a manager’s face when he said Vincent Gallo was “the outlet mall version of Viggo Mortenstein.”

A good example of this is the “Monster Head” scene. Throughout the second part of the movie we’re told that Duff hates being called “Monster Head.” This joke goes on for twenty boring minutes until the Italian kid (who is related to Jason Plot Device, I think – this kid’s name is Vinny Plotto Devicio), explains the story. We cut to a scene of four guys sitting in a car. Duff is receiving a blowjob from a hooker who’s ugly even by hooker standards when Buff says (and quite eloquently, I might add) “dude, that chick has balls!” Duff shoots the girl while she is still sucking him off.

After telling the story Steve, Duff, and Vinny drive around a bit. They run across a group of Asian kids in one of those modified cars the unfunny fag in every group of friends will point at and say “HURR RICER” when Vinny decides to stick his head out the window and say “HEY, LOOK AT THE GOOKS!” One Asian kid says “we’re not gooks, we’re Korean” and shoots Vinny. Fast forward to the funeral scene, when we come across...

Steve gives Heather the necklace and discovers Duff and one of his cronies smoking crack in the back room of the funeral home. He runs off to follow Heather, who is now at a tennis court somehow. Her boyfriend calls her out on the necklace and hits her, then walks off while she cries. Steve tries to console her but she, too, runs away, likely looking for a boyfriend whose torso is three feet higher and to the left of his legs (she wants to be able to take him all in).

Steve, who has apparently forgotten the argument he had with Duff all of five minutes ago, decides enough is enough. If anyone is going to have crosseyed mutant babies with Paris Hilton, it’s going to be him. He calls Duff up and takes out a hit on her boyfriend.

The following scenes are the closest thing to a “climax” the film has. Unfortunately, because they’re shot at night and Barnun used his lighting budget on a crate full of wire coathangers and butane lighters (per Hilton’s request), they are also unwatchable. As far as I can tell (and these were hard to decypher – the entire five minutes looks like someone held a crunched-up ball of panty hose over the camera lens), Duff and Steve break into a frat house, where Heather’s boyfriend is cheating with some other girl. Steve tries to shoot the guy and wusses out (we know this because Duff spits out a sentence that has the word “pussy” in it literally five times), so Duff takes the gun and shoots the boyfriend instead.

After this there’s some scene that’s over ten minutes long and shot in front of a mirror. It gave me a migraine so I went to the restroom and when I came back and there was some bullshit about a guy who’d been on screen for two minutes prior being a corrupt undercover cop trying to kill Duff. The cop shoots up a bunch of people in Duff’s house (one of whom is, I kid you not, named “Piss-Head”) while Steve crashes out somewhere and has a final vision of Heather. This leads us to....

In the dream Steve admits to killing Heather’s boyfriend. Heather said it’s “the most romantic thing anyone has ever done” and says she will consider living with Steve when he goes to the MLB. Please note that since this is a dream sequence we never actually see Heather’s real reaction the murder, thus nullifying the one thing the movie had that resembled a story. Unfortunately, Hilton’s contractual nine seconds of screen time ended at that point, and the Cocker Spaniel Barnun hired as her understudy died tragically when Hilton strangled the dog for “crimping her style”. Barnun explained that the dog was not wearing her coat but was naturally furry, to which Hilton replied “I thought it was Nicole Richie”.

So Duff drives Steve to the airport, somehow not knowing the corrupt cop killed over thirty people in his living room. They have a nice conversation which does not contain the words “gun”, “liquor”, or “pussy” when two teenage hooligans egg their car. They jump out and chase the teens down a flight of stairs. One of the teens pulls a gun and aims it at them. The screen goes black, Steve says “guess what happened next”, and the sound of two gunshots (thankfully unaccompanied by “BLAH BLAH”) plays. Roll credits.

And that’s it. After a few vaguely connected hours of white kids shooting other white kids while doing drugs, the two main characters are killed for no reason by people who have less than ten seconds of screen time. Well, maybe they’re killed. I dunno. Since it’s just gunshot noises we’re left with the possibility of a sequel, maybe something like “The Hillz 2: Theez Hillz Gots Skillz” or “Paris Hilton doesn’t belong on any hill but Calvary Hill with nails sticking out of her wrists: Da Hillz Vol. 2 (Sean Paul Wiggahz Deluxxxxx Mix)”.

Let’s just hope that, whatever the sequel is called, it has plenty more heart wipes and star wipes. Without those any movie is totally without merit. 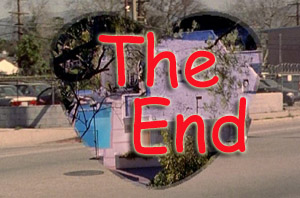