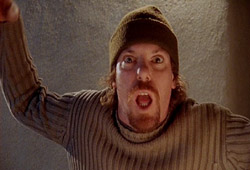 Don't laugh. That's pretty much the reaction I had to the movie, too.After the fight the four boys raid a party. The exact same shot of a girl going "what are those guys doing here" runs twice in a row when they walk in. While the other three run around looking for some pot to smoke Steve “hooks up” with the ugliest girl in the world. Besides her hair, which I’m pretty sure is just some spinach a bird vomited into a shower drain, the fact that her face is pulled back so tight she looks like a marginally offensive Chinese caricature has kept me from having an erection for over two weeks. Every time I get an inkling of an idea about bedding some sexy mama Mrs. Tumorhead, as I’ve taken to calling her, swoops into my head like the Wicked Witch of the West and travels down my bloodstream into my genitals, where she lays into my testicles with her sharp little candy corn-looking teeth until I’m vomiting and crying all at the same time.

But the Ferengi-looking snatch Steve nails is not the focal point of the party scene. Instead, after one of the most disgusting makeout scenes I’ve ever had the displeasure of pounding my dick with a hammer to, we’re taken to the real focus: A date rape.

This could use a little setup. Let me say first that I hate anyone who makes pot a regular part of his daily routine. Not that pot bothers me, but if I were to let my life revolve around a plant it would at least be something useful like Aloe Vera or one of those flowers that smells like rotting flesh. Nothing makes me angrier than to hear some dreadlocked pothead in a Jack Johnson T-shirt rattling on about how pot should be legal because it’s less harmful than alcohol. Anyone who has ever gone on a tirade about the evils of big corporations or the health benefits of “sticky green ganja” should be relegated to a McDonald’s grill. And I don’t mean cooking – I mean stuffed in the thing and fried so at least they could feed the hungry like they always wanted by letting some starving Somalians chow down on their greasy entrails.

That said, I’m pretty sure Barnun has never seen someone use a drug, illicit or otherwise, in his entire life. This comes as a shock since anyone who would make a movie like “The Hillz” likely spent his prenatal days floating in a pool of Captain Morgan and Vicodin instead of placenta. Why do I make this accusation? Because in the following scene the three other guys take a girl to the bedroom so she can smoke pot with them. She takes one hit off a pipe and passes out instantly. The three guys argue about who is going to rape her first. Duff sneaks to the bathroom and finds a washcloth in a drawer. Hahaha, just kidding! What kind of whacko would keep a washcloth in a bathroom? He really finds a gun, you gullible sucker. When he returns the other two have vacated. Another dude is getting ready to lay the rape down so Duff pistol whips him. The whole group gets kicked out of the party and one of the four friends – I think his name was Jason Plot Device or something – gets jumped by the cops from the beginning of the movie. 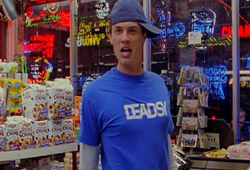 This is Steve 5. Please note that this is the most emotion he shows the entire movie.

In the next few scenes Duff goes on a killing spree that would be a lot more entertaining if “spree” was one person and the only “victim” was him. He stuffs the cop that beat his friend in a trunk and drags him out to the forest. The friends watch as he shoots them. He shoots a kid for badmouthing him, then kills a drug dealer and his two lady friends, along with the drug dealer’s bodyguard to avoid being robbed. There are a few things to note about this, however:

Fast forward to a year later. Steve is now in college and is visiting his hometown for one last time. He tells us a professional baseball team is about to draft him He runs into Duff, an Italian kid who I failed to mention until now because he provides absolutely nothing to the story, and a big ugly dude I’ve taken to calling “Buff”. They agree to hang out before Steve leaves town again, which leads us to a really classy “heart wipe” and then..

Steve tells the crew he will be back after he goes to visit Heather. He finds her at her boyfriend’s house, where she is lounging in a swimming pool. After a pointless, not to mention disgusting, thirty-second shot of her camel toe, Heather tells Steve he needs to “make something of himself” before she’ll consider ditching her boyfriend for him. This is a great financial move, of course, since professional baseball players make slightly less money than fry cooks and are generally captured and sold to slavery by rich white landowners.

Heather’s boyfriend catches Steve laying the mack down and confronts him. Again, a scuffle ensues, followed by yet another lame-ass insult match. This time, it goes something like this:

Heather’s Boyfriend: Is that blood on your pants? Is your pussy bleeding?
Steve: Fuck dude, you smell like tuna. You sure you ain’t packing a pussy down there?
Heather’s Boyfriend: The only pussy I’m getting is the one you won’t get, you pussy-boy pussy!
Paris Hilton: WHY DOES HALF OF MY FACE LOOK LIKE IT’S IN SLOW MOTION

Repeat ad nauseam until you swear you’re watching an episode of “Yo Momma” that doesn’t involve Wilmer Valderrama sucking a pimp off for a bottle of hair gel.

The thing about Paris Hilton is that she is (to use an early Latin term) butt fucking ugly. She is so stupid, so utterly unappealing, in fact, many celebrity magazines speculate that she is one of Cortuney Cox’s miscarried children, but managed to escape a shoebox under Cox’s bed before David Arquette smashed her tiny head in with a hammer. Poison control centers around the country have implemented a new vomit-inducing tactic, which includes shouting “THINK ABOUT FUCKING PARIS HILTON” until the patient is laying face-down in a pile of his own entrails. This is why I don’t understand Steve’s motivation in the next scene. Personally, if I was confronted with having to bang Paris Hilton and I escaped, I’d celebrate by snorting so much coke my house would look like a Colombian snowglobe. But Steve goes on a binge because he doesn’t get to fuck her. This could only make sense in the world of “The Hillz,” a magical place where scores of people disappear daily and nobody thinks to question the cracka-ass motherfuckah running down the street firing shots into the air.