Harvest Moon: The yearly Harvest Moon game gives gamers who have never worked a day in their lives a chance to get a taste of the real thing. Boring is the name of the game in this series. Plow fields, milk cows, try to woo an underage anime girl into marrying you, none of it translates into excitement. If only it had Asshole Phsyics. 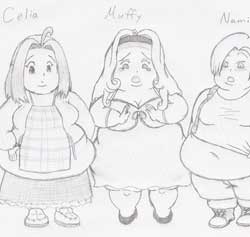 I google image searched "Harvest Moon" and this came up. Just one of the many ways the Internet makes our lives easier.Sneak into a neighbor's farm and plant a spring with a boxing glove attached. When the poor bastard tries to pick his "crop", he'll get punched square in the face and go flying into the next boring Harvest Moon game.

Asshole Physics aren't just for annoying humans, animals can get in on the fun too! Tickle cow udders until they get mad at you and bite your balls off, both of which dangle in real-time. Throw a cat off a mountain and watch it roll down the hill complete with ragdoll physics. Remember, cats always land on their feet. A chicken trying to get some clerical work done? Throw a wastebasket at it. It's all doable with Asshole Physics.

Halo 3: Halo 3 may be coming out next week but it won't be featuring Asshole Physics, only assholes.

BioShock: BioShock was one of the few games released this year that did not include Asshole Physics that was actually enjoyable. Still, I can't imagine what this game of the year contender would have been like if it let you be asshole.

There could have been a prologue showing you what Rapture looked like before the cliched mutated monsters starting wreaking havoc. You could have gone up to Andrew Ryan himself, smash a whiskey bottle in his face and scream, "THIS IS WHAT I THINK OF YOUR LIBERTARIAN UTOPIA!" Imagine the fun you could have hitting the water-retaining windows with a Louisville Slugger while others watch in horror and plead for you to stop.

Asshole Physics has come a long way since a plucky young webmaster on the Internet pretended to harass a female cop in a video game because a female cop once broke his heart, leaving with him an irrational hatred of all women. Unfortunately they have an even longer way to go before they become accepted in this industry.

We want people to be assholes, not in real life, but in video games. Asshole Physics has the ability to change the world, allow people to take out their assholish tendencies in a controlled environment, and make going to grocery stores, banks, and dogfights a pleasurable experience again.

Developers should embrace Asshole Physics for the countless minutes of gameplay it adds to their title and because Stone Cold said so. We have dual core processors and dedicated physics cards. Don't waste these precious resources on box stacking puzzles and showing blades of grass realistically swaying in the wind. No one cares about that bullshit. I want publishers to create task forces to ensure that each game features some aspect of Asshole Physics. It not only makes otherwise cookie-cutter games fun but gives us a reason to live.

That's why I want you to write your local representatives and senators and tell them you want more Asshole Physics in your games for a better tomorrow!

Disclaimer: Don't actually write to congress about Asshole Physics. They have more important business to attend to for the good of our great nation, such as taking bribes and soliciting sex from men while on the shitter. God bless America and God bless Asshole Physics. Now to go back to playing Team Fortress 2. See you in hell, suckers!