Half-Life 2 upped the ante (which was now at 50 cents) when it came to Asshole Physics. Valve crafted a living breathing 1984-esque Orwellian world where the government outlaws any type of free expression. Fortunately for you, the asshole, what the Combine didn't mind was being a complete prick to everyone you meet.

Not only could you throw liquor bottles at NPC's heads which shatter in real-time (the bottles, not the heads), they would react in much the same way real people do, by telling you, "Quit it, will ya?" and continue looking oppressed. Find some frightened people huddling in their apartments? Give them something to cry about by throwing their TVs out the window. Throw a soda can at a soldier's head and run away while doing your best Curly impression. They'll make chase and beat the shit out of you. The NPCs even used Asshole Physics against the player, at one point making you pick up a can and throwing it in the trash solely for their amusement. 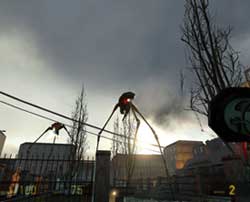 Yawn. I liked it better being an asshole than a stupid scientist fighting a bad War of the Worlds ripoff.Unfortunately Half-Life 2 devolved into some kind of first-person-shooter that ended up using physics for, ugh, puzzles. Jumping puzzles were replaced by exciting new box stacking activities and the industry hasn't been the same since! Still, that first level sent Asshole Physics to dizzying new heights, much like the many Chinese food boxes strewn throughout.

Then nothing happened for a while. Asshole Physics was in danger of becoming extinct, that is, until Bethesda announced their latest installment in the Elder Scrolls series, Oblivion. It was going to take Asshole Physics to horrifying new levels by combining radiant A.I. with physics to create a new generation of Asshole Physics. The developers were promising the ability to hide ex-lax in apples and sneak around placing them inside people's houses. Then when they wake up for the day and eat the apple that mysteriously ended up on their bookshelf, you could trail them all day watching poop drop from their butts, which you needed for a fetch quest where you must collect ten turds for the mighty Poopslayer.

Unfortunately Bethesda didn't entirely deliver on their promises and radiant A.I. was a bust. Instead of NPCs waiting for you in one spot and doing nothing all day as in traditional RPGs, NPCs in Oblivion would wait for you in different spots and do nothing all day.

Despite the underwhelming A.I. Besthesda's trademark practice of placing millions of cups, plates, and other useless crap throughout the game world made for some very assholish situations, such as shooting a fireball inside some bastard book keeper's shop and forcing him to spend the better half of his day staring at a wall thinking about all that reorganizing he'd have to do.

Oblivion didn't revolutionize Asshole Physics, it only refined it with more objects, more NPCs, and more game crippling bugs, which is more than we can ask from a dumbed down consolized PC RPG.

The Current State of Asshole Physics

That brings us to today. There is very little on the Asshole Physics horizon and it looks as if developers have all but abandoned the concept. Is it pressure from the ESRB? Video games already have a bad rap for their violent images and influence on children. If video games allowed children to not only kill people but slightly irritate them as well, would game boxes have to carry a warning label such as "A" for "Asshole". Warning: This game allows children to kick boxes into virtual office workers who barely react and continue going about their business.

Actually, our Something Awful scientists, fresh from their stint at the Rockwell Correctional Facility for crimes against humanity, have determined that children who play games rich in Asshole Physics are less aggressive and have a much higher sperm count. Asshole Physics allow gamers to get out their frustrations in the virtual world, lowering their overall desire to be an asshole in real life. Kids without games with Asshole Physics tend to abuse trash cans, a growing problem in today's society.