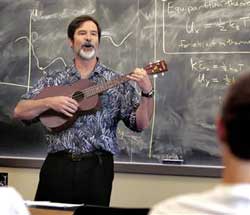 Google has very little information on Asshole Physics, but plenty of information on assholes who teach physics... with, uhm, guitars.Because most people can't read and comprehend at the same time, there is some confusion as to what Asshole Physics really is. The basic recipe is composed of the following ingredients.

I have seen some games such as Saints Row and Skate incorrectly identified as games with Asshole Physics. Both however, miss the mark. Saints Row may feature a physics engine, NPCs, and numerous objects, but the world is anything but orderly. Running over a guy and sending him into orbit is hilarious, but a little more than assholish. You can't elicit an irritating reaction from a dead man. Believe me, I've tried.

Skate features ragdoll physics that portray your skater falling in hilarious ways. Unfortunately, you can't be an asshole to yourself. The whole point of Asshole Physics is to inconvenience other people. Besides, a skate park isn't exactly an orderly world. If Skate featured soccer moms carrying groceries from their car to their house that you could skate past and send their groceries flying into the air from all the xTreme action, then it would have Asshole Physics.

Asshole Physics cannot be the sole purpose of a game. A title can't be released called "Asshole Physics Adventure Fun Time" or something. The game has to feature an established type of gameplay, such as a first-person-shooter or an Excel spreadsheet. There's a lot of fun in finding ways outside of traditional gameplay to pretend you're irritating people, despite the fact that all you are really doing is wasting your life playing video games.

I should note that there is a game called Façade that is making all sorts of strides in Asshole A.I. There is nothing more fun than calling the main characters a racial epithet right off the bat and watching them throw your ass out and shut the door in your face. If only we could see this kind of progress in commercial titles.

Recent Games that Could Have Used Asshole Physics 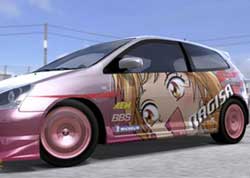 I don't know if this is Naruto or not but it's still mad gay. And I mean gay as in homosexual.Forza Motorsport 2: Featuring a powerful physics engine that tells you how much rubber is left on your tires and when your bladder is full so you can make a pit stop is one thing, but is useless when it comes to making an otherwise boring racing game fun. Most players don't care about that nonsense anyway. People who play racing simulators are uncreative, soulless monsters.

There is nothing fun about pretending to drive a car you could never afford in real life around a track 600 times in a row while the telemetry thingy tells you what g-forces you could be feeling if you weren't such a fat bastard with no life and were really driving. Guys who are into racing simulators are all Milhouses who say, "Perfectly level flying is the supreme challenge of the scale model pilot." No one cares. Just make it crash you insufferable twat!

Gran Turismo may have A-Spec mode, but Forza could have had Asshole-Spec mode. In this mode bridges would be erected over the course so you could drop eggs and condiments onto cars flying by below, ruining their custom Naruto paint job. Completely cover some poor sucker's windshield and send him flying into the retaining wall, where he gets out and shakes his fist at you thusly while you escape in your zeppelin.

Or hop in the chariot from Ben Hur and let the wheel spikes fly. Try to pop those fancy Corvette tires and give the rich what's coming to them. The sky's the limit with Asshole Physics.