It's not often that I comment on current events, but the global unrest has boiled over into full-blown chaos. People are out there burning down the cities in which they live. Blind rage compels them to turn on one another with unspeakable violence. They drop to their knees in the rubble-strewn streets and claw at their own flesh as they moan, unseeing eyes rolling back into their heads. The outcry for a modern video game about cavemen and dinosaurs is threatening to tear apart humanity as we know it.

This catastrophe has been long in the making, initially sparked in 2004 with the cancellation of Peter Molyneux's ambitious Xbox title that had simply been titled B.C. The game promised to place players in control of a tribe of cavemen. Cavemen. Fantastic. Right there we already have half of the elements needed for the greatest game ever made. As part of the tribe's arduous climb up the food chain, they would encounter dinosaurs and fight against them for survival. If you're following along at home, that's cavemen and dinosaurs. In other words, pretty much everything you could ever ask for. Even better (?), Molyneux proudly declared that injured dinosaurs would spill "swimming pools full of blood". 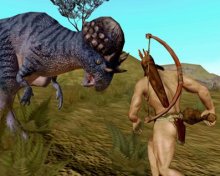 Unfortunately, the game never saw the light of day. In B.C.'s absence the public slowly became aware of a void that existed in their lives. That void was shaped like a dinosaur and cavemen. And also like a video game, so I suppose it was in the shape of a game case or maybe a cartridge.With each passing year, the unfulfilled yearning for a new cavemen and dinosaurs game gave way to a realization that the universe is an uncaring place with no god and no purpose to be found, that life is an all-too-short gauntlet of disappointment.

The situation came to a head this year when the next generation of consoles crested the horizon. As the Wii U and competing platforms from Microsoft and Sony became a sure thing, a whirlwind of rumors circulated, naming all sorts potential launch titles. Among them, there was absolutely no indication of a cavemen and dinosaurs game. There had been an unspoken hope in the public consciousness, and it was dashed. Humanity had been backed into a corner, then that corner had pinched humanity's bottom and left a weird mottled bruise.

Now society is spiraling out of control. Every day we see normalcy and kindness erode in the face of desperation. Unless a cavemen and dinosaurs game comes along soon, we will tear ourselves apart until there's nothing left.

We need a modern day Joe & Mac. These are cavemen with relatable problems. The "cave babes" have been scared away by neanderthals, which is a bummer no matter how you look at it. Joe and Mac (that's the formal way of addressing them, only friends call them Joe & Mac) must throw bones tied together with rope, roll rock wheels, and do about a million unnecessary somersaults as they mow down the bad guys and any dinosaur that happens to get in their way. This cavemen and dinosaur game is exactly the salve that humanity needs to rub into the cracked soles of its feet.

We need a modern day Trog. Sure, it's just a rehash of Pac-Man with cavemen replacing the ghosts, eggs in place of power pellets, and a dinosaur protagonist. There's a lot more to the game, though. For instance, every caveman is a cyclops. Think about the implications. Get back to me if that turns up anything remotely significant or interesting.

We need a modern day Caveman Games. The olympics are capable of inspiring entire nations. Add cavemen and dinosaurs to the events, and maybe - just maybe - we will stop setting ourselves on fire then running through our neighborhoods, going out of our way to trip people by stepping on the heels of their shoes from behind. If a woman or man can press buttons on a controller and watch a caveman pole vault over a T-Rex, anything is possible.

We need a modern day Bonk's Adventure. It features a Charles Schultz character with encephalitis, grabbing all the fruit he can and using his freakish cranium to smash sleeping dinosaurs who have inexplicably donned hats and wigs. Does Bonk's can-do attitude not hold the key to our salvation?

We could also put up with a modern day Chuck Rock. I guess. Things are getting really desperate, so whatever.