Crucifun: The Wide World of Crosses

In Ireland or Great Britain Celtic Crosses are often seen on tombs or as monuments to Celtic (read: slightly pagan) Christianity. Everywhere else, particularly in the United States, the Celtic Cross can be found on the backs and biceps of dudes who like to pretend they are Irish even though they have never been to Ireland. Goths also have a strong affinity for the Celtic Cross, perhaps because it's like a cross only it is fancy and has a lot of neat squiggles and stuff. It also looks cool in silver hanging alongside an ankh. If you want a cross that either says "I LARP" or "my House of Pain CDs mean I'm in the IRA" then this is the cross for you. 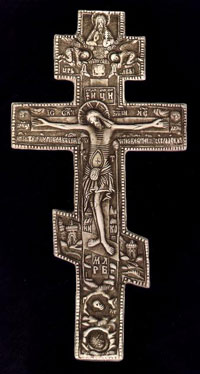 Eastern Orthodoxy is to Christianity what that introverted uncle that forgets to shave and loves trains is to you; it's familiar at the same time as it's strange and mysterious and maybe a little creepy. It originates from Byzantium or Kublai Khan or something and all Eastern Orthodox churches I have seen look like they combined a Catholic cathedral with a thrift sale from some benighted corner of Missouri. The Eastern Orthodox Cross is similarly distressing. It looks like a cross or crucifix, but it has an extra bar on top and a weird diagonal slash at the bottom. They are usually encrusted with symbols and words written with a strange alphabet that might be Cyrillic or Tenctonese, but could also be some forbidden occult alphabet lost when the Star Gate was closed in Kloblobistan.

Eastern Orthodox Crosses can be found hanging on the wall of a kitchen where something is being stuffed into cabbage by an old woman. Unless you're in her family the food will be ghastly, but the good news is her gigantic son in a track suit can sell you bootleg DVDs out of his trunk for a dollar. Just don't ask him about his cross and why Jesus has shrimp tails wriggling out of his eye sockets. A faux pas like that will land you in a sanitarium shrieking the prologue of a harrowing journey into eldritch horrors to a New England dilettante who keeps a dream journal about black ships and cats from Saturn. 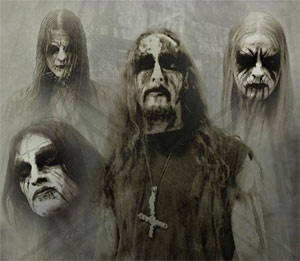 There are few symbols more pathetic than the inverted cross. Known as the Cross of St. Peter to Catholics, the cross was meant to symbolize that St. Peter was crucified upside down and did not feel himself worthy of commemoration in the form of a normal crucifix. Centuries later, in one of the most egregious examples of brand appropriation, the inverted cross came to be associated with Satanism as a lame sort of gang-sign disrespect.

Christianity is based around the idea of faith in the omnipotent creator and his martyred son, so you would think the logical opposite of this would be to not have faith in those things. Alas, Satanism travels a far lamer road, believing in Christian mythology and then choosing to side with the crappy antagonist fated to lose. It comes right out in the Bible and says Satan is going to lose, and satanists apparently believe this as well as they seem to accept Christianity as real, so why pick the losing side? The answer to this question can be found in a cursory examination of satanic metal album covers. Those guys always bet on black.