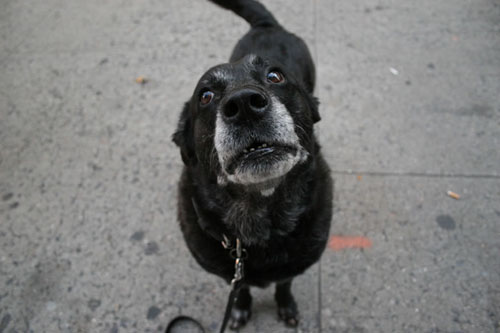 I saw the dog I like today. I was hanging around on 14th Street, just taking a walk, and I saw it across the street. It was standing next to a bush in front of the church (I don't think the dog is religious… it doesn't seem religious, anyway) and looking alert and sniffing the wind. Suddenly it pricked up its ears and looked down the block, and a guy was walking his little dog toward the dog I like. It ran up to see the little dog, and the guy patted it on the head and ruffled its ears a little bit while it sniffed his stupid dog.

Why is it so easy for a guy like that? Maybe it's because he already has a dog, so he's not so shy and nervous around other dogs. He doesn't feel like he has to impress them. I was a little concerned that the doggie might consider it rude, but it didn't seem to mind that much. It completely ruined my opportunity to go say hi, because that other guy was already petting the dog and I would just seem sort of pathetic if I went up and stood there like I was waiting my turn, so I just left.

I went back later to see if the dog was still there, but it had left already.

The more I think about it, I really think I'd be a good friend to that dog. I can throw a stick just fine, and I swear to god that I'd play fetch with it every single day until we were tired. I'm not rich, but I can afford dog food and treats, and I could probably even give it some people food once in a while on special days.

I've looked around for that dog, because next time I see it I will definitely go up and pet it.

I saw that dog I like again. It had its leash in its mouth and its ears pressed back, and it was trotting down 14th Street, stopping once in a while to smell plants and buildings. I was across the street, and I really wanted to go up and pet the dog and tell it how I felt, but it was like I was paralyzed. What should I say? Should I try to play it cool and just whistle and hold my hand out to smell, or should I tell the truth?

"I really want to be your friend, doggie, and I want to take you home and brush you and feed you doggie treats and run around the yard for the rest of my life.

But doggie wouldn't understand, and I'd just look silly. So I just stood there, like always, watching the dog disappear under a fence, not knowing what to say.

I know a lot of you are thinking "what's so special about this dog that you'd be so nervous around it?"

If you looked into the doggie's eyes, you'd know. It has the most soulful eyes, and it always seems a little bit sad, like it needs someone to pick up its front paws and walk it around like dancing.

I also like how doggie seems so independent. It sometimes wears a leash, but it always carries the leash in its own mouth, like it's its own dog. Sometimes I think that maybe it goes home to its own apartment at night, and lives there alone and pays the rent by carrying the money to the landlord in its mouth. It looks so smart and sweet but with a hint of sadness, and whenever I see it walking alone I think maybe I could fall into step beside it and we could walk together, and then we could go home to the dog's little apartment and I'd help it reach doggie treats off the shelves because the dog is too small.

I just feel like I will never be happy unless I can find the strength to talk to this dog.