I'm your new dorm roommate and I already hate you. 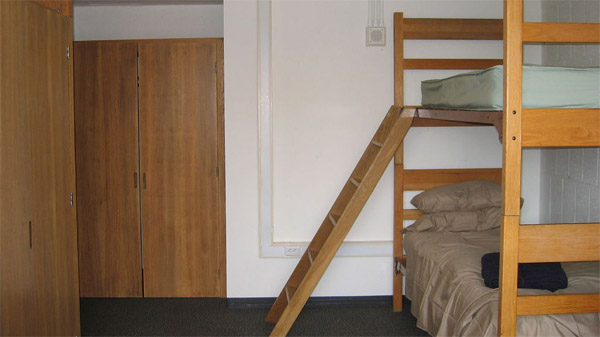 I'm your dorm roommate and I already hate you. You think because I was sitting on the toilet you could get first dibs on bottom bunk? Think you can just make decisions like that? Wrong. I broke in a week ago and that's my bed. Smell it if you don't believe me. Yeah, that's my smell. Bottle it up, call it Eau de Unwashed Weed, and then step away because I'm bottom bunk. Now turn off this indie garbage you got coming out of your little baby pod. It's banned forever. Plug this is. It's a Zune, bitch. Hit play. Hear that? That's the Best of Laurence Welk Box Set. That's real music. That's the official anthem to our dorm room. You don't talk during it, you don't move or fart. You stand up and look at our florescent lights, thanking these wonderful show tunes for keeping you alive. Now shut up and let me pump out to this accordion duet as I take a few hits off my asthma inhaler.

That's better. What, you think it's a strange juxtaposition that a hardcore dude uses an inhaler? Well I think it's pretty stereotypical that your parents are helping their weenie son move in. Cliché, even. Let me guess, they're happily married. I bet they go on long vacations with you. I bet they send you little cards on your birthday and say just how much they love you. Guess what. After eighteen years of leave it to beaver with you, it's time they get a taste of real life. Your mom will love it. She'll be all like, wow, what was I doing wasting my life with gainful employment and panties when I could totally chill with this cool dude every day. That was her saying that about me. So when they get in here I'm going to say some thinly veiled comments about my illegal drug use to get their blood boiling. Something like "I'm going to get high as hell tonight." I've never been very good at subtlety.

Hey don't worry about me, you autistic turd. Sure my parents aren't here, but I don't need help unpacking like you. I live life free of possessions like Thoreau would have wanted. Surprised that I made that reference? So am I. Man, I just live life half Walden, half Dear Penthouse Forum. I don't need any of society's goods to hold me down. Not when I've got yours for free. Those spoons you unloaded, that toothbrush, the handle of your vacuum cleaner. In my mouth already twice. But man, of course I'm not totally empty. I own three things and you are not to touch them ever. 1. My tongue ring collection. Off limits. Don't even look at them. They're pretty much priceless. I'll teach you about them if you get stronger and get your booster shots. 2. My truck. 3. Boom Boom, my Rottweiler. He's out in the truck protecting the tongue rings. I know the school says no pets allowed, but Boom Boom's way too mean to follow any bureaucratic orders like that. He's big, man, real big. He'll keep us safe at night from any nosey cops. Once your parents get back to their world of NPR and oatmeal, I'll be bringing him up. Don't make eye contact or touch him, though. That's a warning not a threat. Also, he'll be hungry so you better start warming up those Easy Macs or he'll just fill up on your suburban little skull.

But before we get Boom Boom in the mix, which of these three posters should I hang up?

Trick question. We're hanging this one. Whoa there, close your mouth, baby. You look like you've never seen a larger-than-life photograph of a woman giving birth. Sorry, is my enormous grotesque pornography not artistic enough for you? Too bad. This is life. It's a miracle zoomed in eight times. This happened to you. That happened to your mom. Van Gogh's post-impressionist sunflowers got nothing on the freakiness of a crowning snapshot. Women love it.

The women I'm with, at least. Which, by the way, I don't want you to talk to any of them. Even if they're tripping their faces off and asking you for help updating Internet Explorer at four in the morning, I don't want you to say a word. Nothing, understand. They are dangerous and diseased and even the slightest noise could set them off. They are like those toads that squirt poison when startled if you gave those toads a few hits of PCP. Don't ask for their names or what classes they're taking on campus, and don't ask if they're prostitutes because they most certainly are.

Hate to change the subject, but is the room, like, blinking to you? How much is the school making you pay for this dump? Too much, that's for sure. They need suckers like you to cover the costs when I come with a few friends and a pair of pliers to steal all this copper. But, man, these lights. I got to change them to red. Do you mind? I don't even know why I asked. I like it dark. Like a dark room, like I'm in the womb. Also it makes it easier for me to come down after a weekend high of swallowing whatever pills I find around your side of the room. You, by any chance, wouldn't have any prescriptions with gnarly side effects would you? Forget it. Let's focus on one thing at a time. Getting red lights. Go get them. Until then, I'm going to break these stupid white ones. Watch your eyes, this glass is sharp.

Oh, one last thing before your parents come back. We have bedbugs. I think you brought them with you in your Volvo. Gross, man.