The New Superman Movie Is Weird

The upcoming Superman film has only existed on the faintest edge of my radar. I don't dislike the character, it's just best to avoid learning too much ahead of time. Otherwise I might get my hopes up and suffer heartbreak when I find that the project gets canceled, like Peter Jackson's long-rumored adaptation of the Lord Of The Rings trilogy.

That said, I couldn't avoid this week's gossip surrounding a photograph from the Superman set. People were positively freaking out about the iconic hero's costume, seen here: 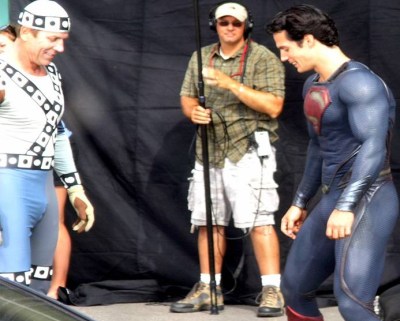 It certainly is a radical change.

Starting with the obvious, the colors are all wrong. There's no cape. The outfit seems entirely too tight. The actor appears to be very bulky and not the "type" that immediately comes to mind when you think of the man of steel.

To be picky, Superman doesn't wear tape on his hands and fingers, and he doesn't wear a skin-tight cap. Unless there's an alternate costume from the comic books that I haven't seen, he doesn't wear bands of black and white checkerboard squares adorned with circles.

Still, consider me intrigued. I didn't realize that modern day filmmakers would be willing to overhaul Superman in such drastic fashion.

The costume for Bizarro on the right is also pretty good. They should touch up his skin with some white makeup and reverse the symbol on his chest, but otherwise I like it.

With the film on my mind, I brewed a pot of coffee and read up on all the available information in one sitting, using my coffee-powered computer. The more I learned, the stranger this Superman movie seemed. Most of the intriguing tidbits came from interviews with the writers and director, which I saved in a lengthy text document in my dedicated Bad Update Idea folder. These are the most relevant bits.

On the character of Superman:

"He's a doctor and a detective but he's also in 3D. His character is highly unconventional in the sense that he's sort of a smart aleck that says exactly what's on his mind. He's, you know, a sarcastic and sort of grumpy type that makes the audience laugh. That definitely rubs his partner and surgical staff the wrong way, but at the end of the day he saves lives, and isn't that what Superman is truly about?

When you think about it? Isn't it?"

"He did come from another planet that blew up. He arrived in a spacecrib that fell in a crater and two hicks raised him on a patriotic farm. All of that stuff from the comics is here. He just doesn't have any superpowers or anything. He's a regular guy like you or me.

The fact that he came from space almost feels unnecessary but we're keeping that in because we spent a lot of money on this great title sequence. There's outer space and an orchestra that starts out all epic then becomes playful as the spacecrib surfs on the ring of Jupiter then gets hopeful and mysterious as the crib enters the atmosphere and the explosion forms the word SUPERMAN."

"It was important that we give Superman a weakness. That's his main problem, really, is that he's so powerful. Since he doesn't have any powers at all, we thought about what the real life version of Kryptonite would be and we came up with something called Emotional Hazards.

These are crystals that are formed when something makes Superman sad or when he faces an inner truth such as the fact that his intelligence and wit drive other people away. When he gets near one of these crystals it's like he loses all his power, but emotionally.

We think it's a really strong idea that makes this more of a character study than a typical Hollywood movie. For instance, when Superman rushes to the airport to catch Lois and tell her he loves her, his powerful feelings can make a crystal form in his pocket and that would make it almost impossible for him to bend the metal beam that's blocking his way."

"We're still finalizing the legalities so it's too early to say, but we're working on something really special. The villain will be someone that pleases existing fans and also fits perfectly with our larger themes of complexity and humanism.

Oh, what the hell. If I don't tell you now it will just leak when the paperwork is finalized. Robocop. It's Robocop.

This time around Robocop is just another cop, but he's evil. We have Peter Weller reprising his role, puppeteered by Lance Henriksen and voiced by James Woods."

"In our version of Metropolis, Christmas is less of a holiday and more of an actual physical building. You can walk into it, and it contains all the concepts that you associate with Christmas, but in like... a metaphysical sense. There is a Daily Planet but it doesn't even have a building. It's not a newspaper. It's more than that. It's an ideal, and a website."

"Our use of computer animation is very tasteful and restrained. We believe that there's something special about pointing a real camera at a real actor and getting something. Then we go in and touch up those scenes with a magic marker, changing people's eyebrows to make them look angrier or more surprised and drawing large frowns over their actual mouths if they didn't seem sad enough."