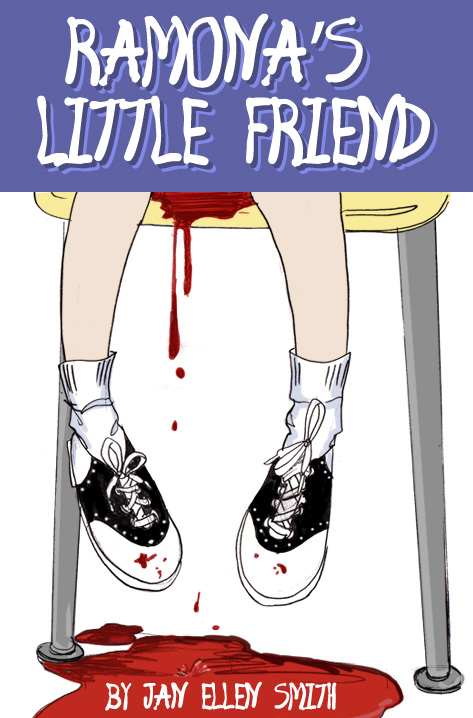 Beverly Cleary's famous little rascalette Ramona Quimby first appeared as a supporting character in Cleary's popular Henry Huggins series before starring in her own book, Ramona the Pest, in 1968. The book was a major success. Cleary's publisher HarperCollins wanted a follow-up, but Cleary wanted to focus on a sequel to her The Mouse and the Motorcycle. With Cleary's consent, another author, Jan Ellen Smith, was brought in. Ramona the Pest had been about Ramona's first few months of kindergarten. Smith's idea was to jump forward in time and document Ramona's experiences in middle school, aiming for slightly older readers. Essentially, she crafted a 245-page suspense novel about Ramona's first menstrual period.

Episodes that Smith presumably intended to be humorous - like Ramona leaking menstrual blood in the classroom, or her friend Jimmy thinking Ramona has been murdered when he finds bloody clothes Ramona shamefully hid in the woods - not only come up short of being remotely funny, but also focus almost fetishistically on blood. HarperCollins wisely deleted a sequence in which Ramona has a disturbing nightmare where she spouts a geyser of blood from her vagina that floods her entire school, but the book was a failure all the same. Cleary returned to the series with Ramona the Brave in 1975, which completely ignored Smith's non-canonical entry.

Since 1986, author Ann M. Martin has published more than a hundred novels under the Baby-sitters Club banner, most of which were ghostwritten by other authors. Boy Troubles was intended to be the 107th book in the series and be published in the spring of 1997.

For reasons that have never been fully disclosed, a personal conflict between Martin and one of these ghostwriters, Raimi Synder, resulted in Synder sabotaging the book as a big "fuck you" to Martin. The book tells the story of a sleepover hosted by the sitters' club president Kristy Thomas, which turns into a horror-movie-like scenario when several boys are invited to Kristy's house while her parents are away. Long story short, the boys graphically rape and even more graphically murder all the girls, literally painting the house's walls with the girls' blood at the end. Unlike the R.L. Stine situation, Martin was immediately made aware of the book's content (which Synder surely never assumed would see the light of day), and the installment was scrapped. Synder was promptly fired.

On the surface, Rice's Hardy Boys knock-off is a fairly typical and relatively well-written young adult mystery book about four male teenaged friends who set out to prove that a spooky house in their neighborhood isn't haunted. But it was what's between the lines that had parents bothered when Butte Buddies appeared on bookshelves in 1982. The title - which alludes to a butte where the four friends like to meet after school - is surely what first raised eyebrows, but the homosexual allusions don't stop there.

If one is aware of certain terms and phrases, the book takes on a whole new angle. For example, the Butte Buddies routinely introduce themselves as "friends of Dorothy," referring to a female character in the book. "Friend of Dorothy" is also an outdated euphemism for someone with homosexual orientation. Another example: The boys often meet at the titular butte to "burn wood," a slang term referring to gay sex. And all four of the boys' names involved some kind of homosexual slang or euphemism: Peter Puffer, Jim Klemme, Willy Woofter, Colin "Poof" Varder. When an enterprising reporter discovered that Rice was an accused pedophile, this pervasive subtext seemed anything but coincidental. Needless to say, Butte Buddies never became the franchise Rice had hoped.